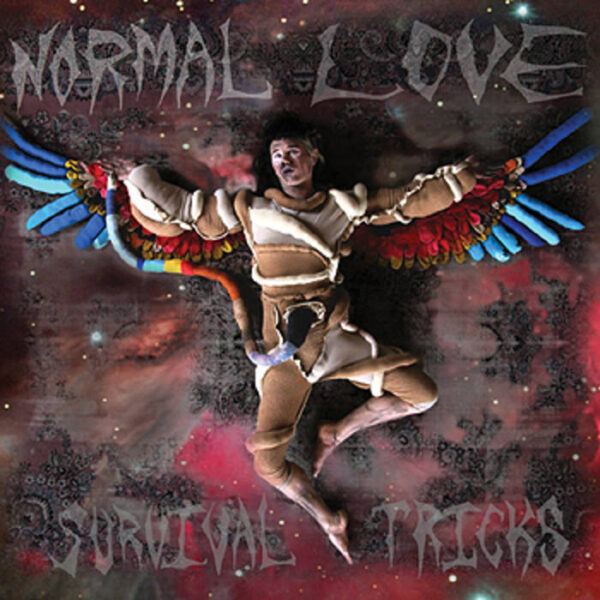 The LP Survival Tricks (ug55 / PE 117) by Normal Love is a joint release by Bryan Day’s Public Eyesore label, and another USA label called ugEXPLODE – which seems to have an inordinate amount of records by Weasel Walter in its catalogue. This particular item came out in 2012 and was returned to me by another TSP reviewer, who couldn’t say anything about it. Perhaps the grotesque cover art, depicting a hapless cosmic Icarus figure, was one off-putting factor; it does seem to imply a conceptual grandeur which the music might fail to live up to.

As it turns out, Normal Love are a decent combo of happy loons from Brooklyn and Philly, playing a very mannered species of noisy art-rock cut with jazzy and improv elements, and they do it with guitars, bass, drums, keyboards, and two violins. They also have a strong gender balance which is more than you can say for some bands, and both Jessica Pavone and Merissa Martigoni contribute their distinctive vocals to some of these odd songs, besides playing violin and keyboards respectively. Their music is much more pro-active and structured compared to what we usually get from Public Eyesore, a publisher which can indulge a lot of half-baked cluttery improv meanderings that are rather unsatisfying. Normal Love manage to give cohesive shape to their ultra-busy blatterings, yet still find space to turn in the splodgy and indulgent noise eruptions whenever the situation demands that someone “takes a solo”.

They also do the stop-start dynamic thing with a certain panache and craft, even when these moments sometimes misfire; nobody will ever surpass Otomo’s Ground Zero at that particular skill, but Normal Love are determined to make a darned good effort at it. In terms of their “influences”, it seems they would list “no wave, industrial, contemporary composition, extreme metal, noise, outsider pop, oddball punk, musique concrète, and free improvisation” for starters, if I’m reading their press statement correctly. Interestingly, they also like to perform compositions, and have commissioned works from their contemporaries, a process which they liken to throwing down a gauntlet; as if to say, “give us something that’s so complex it’s impossible for us to play”. They formed in 2005 but only have one other full-length release, the self-titled album on High Two records. In all, I bethought me of a cross between latter-day King Crimson with Magma, led by two singers who are wannabee clones of Poly Styrene.