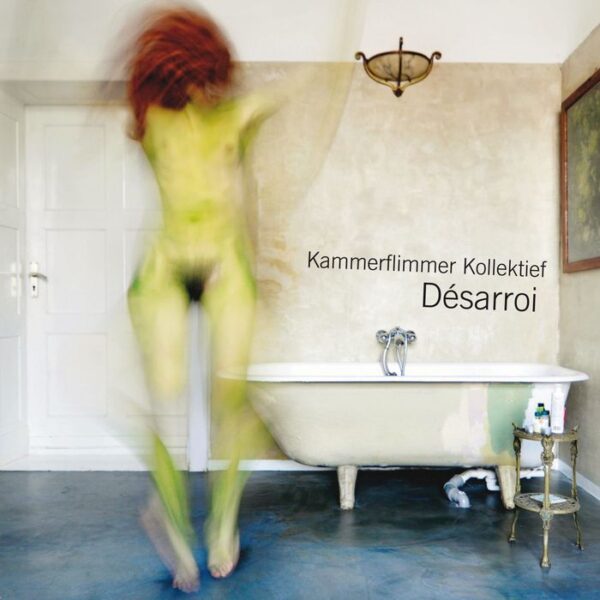 This album makes me think about the popularity and influence of dub music/studio dub technique and the exploitation/appropriation of same by many musicians outside of Jamaica, for this is to my ears, despite the presence of (probably) middle class Caucasian western european musicians, a dub album. The second track ‘Désarroi #2: grundstürzend’ (or “radical”) in particular feels especially dubby with its tape delay effects and laid back bassline. Dub production is a lot of fun to do, and of course you can say that since Pole, the style, or “genre”, has developed in many new and interesting ways. Like any music, its OK for anyone to join in or use it as an influence and why not – Diatribes recently deconstructed two 1970s dubs by King Tubby very successfully by taking the music as a starting point and making the result undeniably their own. That’s just one example.

The word “désarroi” could be translated as “disarray”, “disorder”, or “upheaval” and that’s a very apt description. The component content of Désarroi is piled up on top of itself, strange turns surprise the listener and old ground is covered in interesting ways. For me with the possible exclusion of track three – ‘Free Form Freak Out’ is just that; where the first two pieces are an attempt at jazz-tinged transcendent post-rock, ‘Free Form Freak Out’ gives up any attempt at rigour halfway through in order to make random noises for the remainder of the allotted time.

Fourth track ‘Evol Jam (Edit)’ is a song, despite its Miles Davis/Sonic Youth-referencing title; or should I say it’s at least a repeated melodic sequence. A female voice intones the phrase “the more you love, the more you can love” over and over. Sudden, pure pop dissolving into distressed tabla loops. And very pleasant this sort of thing is too, not least for the musicians involved. I’m all for variation over the course of an album, but I wonder is this too disparate? Is it evidence of a group who can’t actually make up their minds as to what they want to be? For all the scratching noises (a device also showcased at the end of a couple of tracks later on), out-of-control electronics and sonic detritus, this track still hangs around the traditional and familiar device of a chiming electric guitar riff. After a few plays for me, perhaps due to the collision of two very different sonic worlds, ‘Evol Jam (Edit)’ starts to grate. And while we’re on the subject, so does the tinny slide guitar on track five.

Overall this is a deconstructed pop album, to my mind, with the benefit of high-end production and great mastering; it sounds great. The sounds sound great. The noises sound great. The vocals (where there are vocals) sound great. The dub effects sound great. Everything sounds great. I’m personally not a huge fan of pop/experimental hybrids, but if that sort of thing floats your boat, you’re probably going to dig this album massively. Two things I don’t like – the first piece of music features a mindlessly random, nay clueless, accordion intro which, try as I might, I just cannot understand why it needs to be there. And the unnecessary legend “PLAY IT LOUD” written on the sleeve. And the gratuitous female nude on the cover. Sorry, that’s three isn’t it.