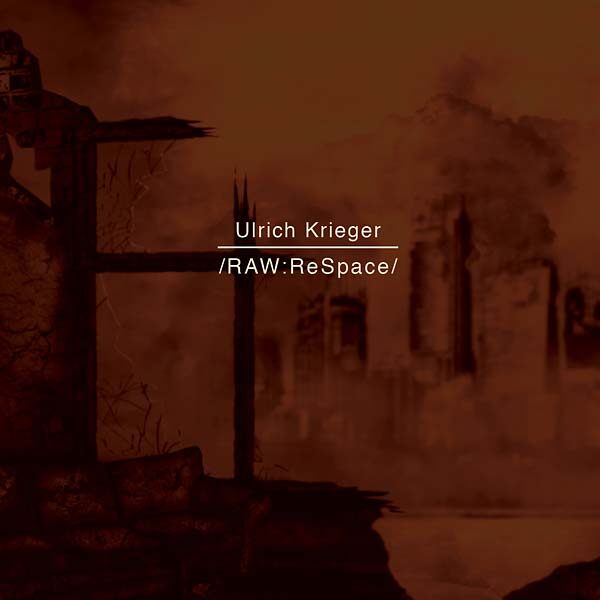 We have briefly noted Ulrich Krieger some time ago…he contributed the composition ‘Black Smoker’ to an album of modern pieces played by Lucia Mense, the avant-garde recorder player. I think I was about right to characterise this California-based musician as a “musical omnivore who composes, improvises, plays chamber music and electronic music, and draws no boundaries between free noise, heavy metal and ambient music.” This is borne out by the splendid double-CD we now have before us today, where we can enjoy several lengthy and very successful forays he has made into the world of feedback and saxophone-generated sounds. It’s called the “first-ever experimental noise-metal saxophone solo album”, a boast which is amply backed up by the music. Everything was recorded in 2013 in Acton, California.

Five pieces on the first disc are gathered under the heading RAW, and it’s intended as a set of musical portraits of Desert Towns of Southern California. Ulrich Krieger thinks big; these pieces are huge enough to get lost in, and feel close to conceptual Earth Art pieces of the 1960s and 1970s; they’re more like geography than music. You can’t really conceive these monstrous, over-sized events happening on a concert stage or at a music festival; nothing could really contain them, it’s not music that lends itself to user-friendly repackaging. All sounds are created with an “electric tenor saxophone”, and he also uses the sax to control feedback, plus foot pedals and delay effects…but Krieger is keen to stress there are “no purely electronic sounds” and that the saxophone persists at the heart of this gargantuan beast. Listeners who have turned up here looking for a harder, sterner version of Sunn O))) or heavy metal guitar drone are advised to check out ‘Needles’ and ‘California City’, which feature the lumbering drumming of guest player Joshua Carro (a composer in his own right, who has made records for Vent Sounds and Somehow Recordings). Both cuts destroy the opposition, and will flatten you as surely as a falling boulder flattens Wile E. Coyote. Krieger’s vocals on ‘Needles’ are especially alarming…an enraged Neanderthal grunting appears to be his only comment on this particular locale, famed in my mind as being the home of Snoopy’s cousin Spike.

The other cuts on CD1 are equally appealing, though; ‘Trona’ could be mistaken for an offering in the “harsh noise wall” genre at first glance, but when you get closer you can perceive the basic sound is still a man’s breath passing through a metal tube; it’s probably that the feedback makes it all seem so crazy, untamed. ‘Shoshone’ emphasizes the wild dynamics of Krieger’s approach, and keeps veering from near-empty bleak drones of death to alarming sheets of single-note noise-drone. One extreme to the other, to put it more plainly. Here’s one instance where it’s hard to believe there are no overdubs creating this complex array. Opening cut ‘Desert Center’ is bleakest of all, where some of the bleached-out quality appears to have been produced by a quarter-inch jack cable, demonstrating Krieger’s mastery of his process. The protracted breathing effects continue for nigh-on 13 minutes; it feels like he’s suffocating, drowning in desert sand and sun, and soon you will join him. Did I mention that RAW is “dedicated to the memory of Lou Reed”? A more fitting tribute to Metal Machine Music you won’t get in our lifetimes.

If RAW is the noisy audience-grabbing attention-seeking half of the set, ReSpace is the one for the cerebral half of the audience. 74 minutes of extremely quiet and understated minimalism, probably manifesting something of Krieger’s interest in Just Intonation; its meditational tones are not too far apart from what any La Monte Young disciple has concocted using sine waves or pulse generators. Krieger does it all with saxophone-controlled feedback and his delay setup. This is a piece of blank canvas conceptual art after the sprawling action-painting of RAW, and its serene calmness clearly hasn’t come from the same raging turmoil of emotion that created the angry and desolate tracks on CD 1. True to its title, the presentation – or re-presentation – of “space” feels like a remarkable feat of engineering, proposing a glimpse of infinite horizons, by very simple means; for some reason I am reminded of the work of James Turrell, whose work always managed to keep one foot in reality (based on natural phenomena of the earth, and the light) no matter how abstract it became.

Krieger’s credentials as an outlaw performer subsisting on the fringes of rock and avant-garde music are foregrounded by the press notes here, reminding us that he’s performed with Lou Reed in the Metal Machine Trio, Text Of Light, Faust, and Zbigniew Karkowski; we might add Zeitkratzer to that list, and he even has some connection to French art-rock veterans Art Zoyd. As to the heavy metal strand, there’s his own noise metal band Blood Oath, and the glowing endorsement by Ivar Bjornson of Enslaved printed in the enclosed booklet, which namechecks everyone from Swans, Sonic Youth and Merzbow to Lasse Marhaug. Similar effusions of delight have been supplied by Lee Ranaldo (he’s composed a beatnik poem in praise of Krieger’s horn), Jean-Hervé Péron, and Ignacio Julià, the jobbing Spanish rock writer, who is unequivocal about the value of Krieger’s music; he calls it “the search for the Absolute”. Superlatives abound in this booklet, but this is very good music indeed. From 1st February 2016.