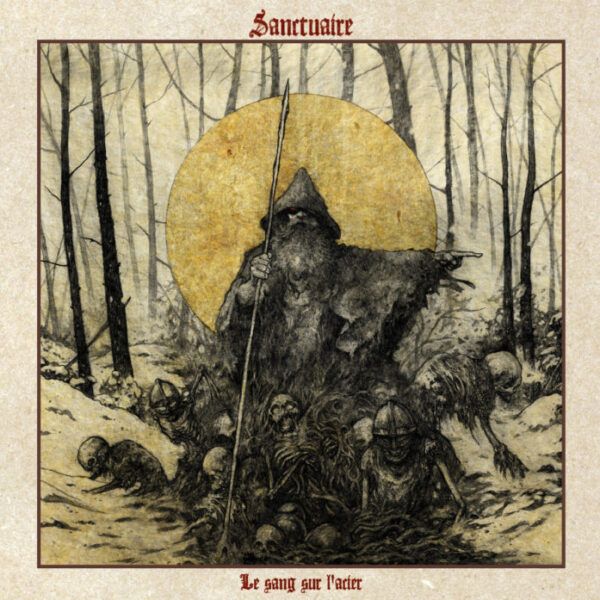 Having poured forth the dark ambient side of his character in the previous “Echo 2 – Les Esprits sont Étoiles aux cimes de la Victoire”, sole Sanctuaire member Monarque unleashes his black metal side in “Le Sang sur l’Acier” (“Blood on the Steel”). True to its title, this EP is an aggressive and angry raw BM creature from start to finish with sometimes booming and enthusiastic percussion, rapid-fire quivering tremolo guitar chords over shifting rhythm structures. Monarque’s vocals are caustic and biting as he half-sings / half-declaims French-language lyrics over the hurrying chainsaw proceedings. Starting with “Graver sur les Pierres, les Souvenirs d’Hier”, Monarque wastes no time tearing through the lyrics and an ever-shifting array of riffs, each building on the previous riff, to a climax of solo lead guitar shred, weeping acoustic guitar melancholy and a heroic tenor choir singing in a cappella style. This track sets the template for the rest of the EP: each song is a tapestry of linked riffs and melodies tied together with busy programmed percussion, machine-gun tremolo guitar chords, raspy singing and occasional martial-style music and vocals. On a couple of tracks church organ and background synthesiser are brought in for an epic majestic edge.

It’s all very dense and efficient with not a note or wayward string out of place and the music either has a very war-like edge or a sorrowing mood in keeping with the recording’s overall theme. The level of musicianship and the quality of production are good and Monarque’s all-round skills in playing various instruments, song arrangements and applying atmospheric effects are on show here. At the same time, there isn’t much here that fans of war-themed raw BM probably haven’t heard before and most parts of the album sound very much like other raw BM bands too numerous to mention. The drumming is of the thin tinny mechanical sort which isn’t a good look for this style of music – it really needs to be thicker and more powerful and booming. The rhythms just aren’t martial enough – we want something soldiers can actually march and sing along to. For a Canadian Québécois act singing in French, Sanctuaire seems too generic and if it weren’t for the fact that Monarque sings in French, I’d be hard put to try to locate Sanctuaire on a map.

The horrible thing is that after the EP finishes, I forget what the songs are all about and I can’t remember any distinct melodies or riffs. Yes, I’m afraid this bloodied steel work is that kind of generic sword-fighting BM recording. At least this EP has a lot of energy and feeling, which is more than I can say for Sanctuaire’s previous ambient recording.