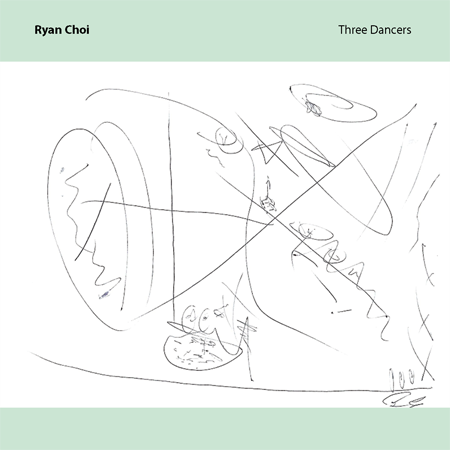 The record by Ryan Choi The Three Dancers (ACCRETIONS alp060CD) is a strikingly unusual piece of improvisation…it’s not often we hear the ukulele played in the context of free music, and not only that but Choi has his own highly idiosyncratic approach to playing it. He’s a young fellow born in Honolulu where he still lives; it’s interesting to me that he’s adopted what I would regard as a “traditional” instrument from that part of the world, and turned it to his own ends. Interesting to me, as I’m a collector of reissues of old Hawaiian 78s recorded in the 1920s and 1930s by Sol Hoopii, King Benny Nawahi, Jim and Bob (the Genial Hawaiians) and others; those records were I think originally “sold” to the audience as novelty items in a market rich with country and blues records, but they have an infectious charm and energy, plus the musicians were all consummate craftsmen capable of producing exciting effects from their ukes and slide guitars. Ryan Choi may not play recognisable melodies, and in fact his fractured music is much more in keeping with the uncertainties of today’s end-times, but he does have the energy of my pre-war Hawaiian heroes. The Three Dancers just crackles with life, even when the sound is understated and spare. There may be electronics on here on one track, but Choi is far from being a noisy improviser.

He’s also not averse to things like repetition, patterns, rhythms – said rhythms sometimes being buried in the midst of his complex uke lines and clusters, but emerging none the less to give each piece here an undeniable inner energy. I like to highlight this because repetition, patterns, and rhythms are so often regarded as “the enemy” by some hard-core improvisers who make no concessions to audience pleasure. Choi uses these forces in service of his central concept, which is to make a dance record, or at any rate a record “about” dance in some way; the title is directly inspired by the Picasso painting of 1925, hanging in the Tate Modern, a jpeg of which I happen to have on my screen just now. Many of Picasso’s details are appropriate to the music we hear; the patterns on the curtains either side of the frame, the rather wan colours of the dancers’ skin, and in particular the jagged saw-edge shapes carried so threateningly by the ambiguous figure on the left hand side. Her face, incidentally, was inspired by a mask from New Guinea; if you decided to fly westwards from Honolulu, you’d be in Papua New Guinea in just 20 hours. This may not have any bearing on anything, of course. Choi has evidently picked up on the spikiness of Picasso’s painting, as reflected in the twitchy energies of ‘Apollon At Eros’.

He may even have found a way to reflect something of the darker side of that image; it was painted after a three-way love triangle that ended badly, and the suicide of one of Pablo’s friends. Choi’s ‘Three Dancers’ is the most dissonant of the three pieces here, and also the most unusual in its surface sound. At first I thought he was using backwards tapes, or playing the entire recording backwards; it’s more likely to be a combination of his highly aggressive technique – he attacks the strings like his fingers were a swarm of hornets – with some form of electronic manipulation. It’s an eerie, unworldly sound. Here, more than anywhere on the record, we have the sense of the Danse Macabre which underpinned the original painting, the sense that the three figures are drawn into a vortex of negative energy from which they can’t escape. Their very limbs are entangled in this nest of psychic tendrils, and Ryan Choi has found a way to express this darkness in sound.

While this is a short record – around 20 minutes, meaning it might almost have fit on to a three-inch CDR – there is, as other commentators have observed, a great deal of musical energy compressed into it. Choi plays the baritone ukulele, with percussion and electronics, and also did the sketch on the cover; it’s as if he asked a stenographer to describe the Picasso painting in shorthand, and this was the result. This record marks his return to music after several “gap years”, but apparently he’d been thinking about the work since around 2001. Very good. From March 2016.