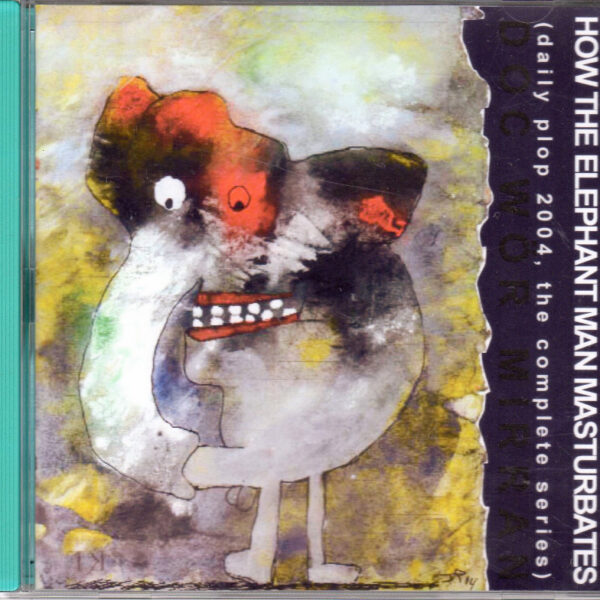 How The Elephant Man Masturbates (Make Twenty / MT-544) is not music, but a CD-ROM containing 232 paintings by Joseph B. Raimond, from a series called “The Daily Plop”. It seems they were all produced in 2004. To say he is prolific would be understating the case, but I admire an artist who does manage to paint or draw something every day. What’s more the quality of his work is consistently excellent. We also received two A6 xerox pamphlets of drawings, entitled Plop Art #1 and #2. Raimond both celebrates and mocks the seriousness of Pop Art. The drawings continue his preoccupation with big butts and breasts. I have little doubt that “Daily Plop” has a dual meaning and that Raimond equates making art with making shit, but he won’t be the first or last creator to have done that. I wonder if he’s aware of the DC Comic Book PLOP!, a personal favourite of this reader which appeared in the 1970s, with covers drawn by the king of grotesque cartoons, Basil Wolverton.

Back to some music now with Kunstlergruppe (HAVE TWO / MT-322). This turns out to be a solo recording by Joseph B. Raimond, and he plays guitar, synth, bass, and drum machines across 13 tracks, some of them with playful humourous titles. I am beginning to see something of a pattern emerging in these CDs, in that you cannot predict how any given album will proceed, veering quite happily from something quite introspective and soulful to a piece of music that’s loud, distorted, thumpy rock nonsense, such as ‘Seattle Grunge Must Die’ or the equally clunky ‘A Day In The Life Of Joe Redneck’. I suppose Doc Wör Mirran have a mischievous bent, and the band thrives on being inappropriate on every possible occasion. Zany historical figures like Alfred Jarry who worked hard to upset polite society would be their role models. Kunstlergruppe is not especially “experimental”, and some of these guitar and synth electropop tunes would verge on being easy-listening ballads, were it not for their slightly unbalanced mixes, strange chord sequences, and minor key settings. I feel like I’m invited into a tasteless living room with a purple settee bathed in a lurid green light. The listener won’t know where to put themselves.