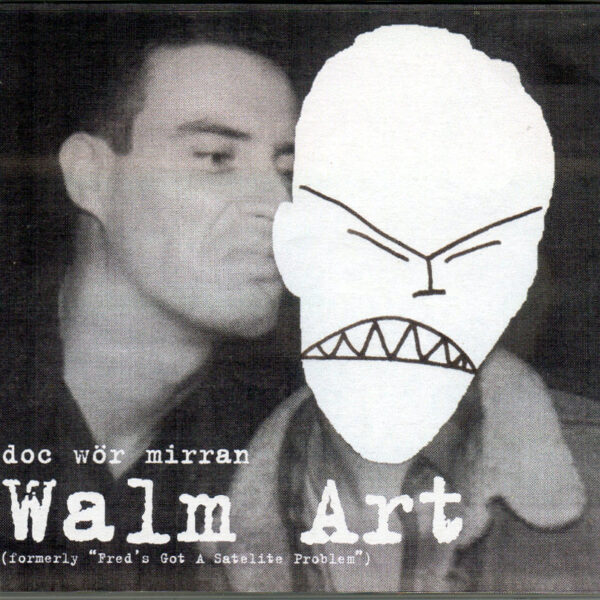 Lastly here is Walm Art (Make Twentyeight / MT-575), the zaniest of the discs in this batch. It’s 38 tracks of insanity, noise and mayhem – voice works, poems, tunes, songs, electronic and tape malarkey..the track titles make little sense, and there’s an enormous credit list to add to the confusion. Taken on its own terms, Walm Art is not half bad, certainly in the tradition of The Faust Tapes or Zappa’s Lumpy Gravy, only far more playful in its experimentation. A true taste of absurdity in experimental music, and some of the individual music pieces are nothing to be ashamed of. To get anywhere near them, you have to go with the flow and subject yourself to all manner of irresponsible and crazed outpourings, spliced together with short ten-second noise experiments. A real fruitcake of an album. It’s DWM Release #125, was formerly titled Fred’s Got A Satelite Problem, and is “Dedicated To Zoogz Rift who would have liked it”. Well, if we’re name-dropping American loons and misfits, I’d like to think this album is more in the vein of Trumans Water, not that I ever got very far with listening to those records…

I just found two more. A Tale Of Two Titties (Make Twentynine / MT-576) in title, cover and track titles resembles something Peter Griffin would have come up with when he was self-publishing porn books, and it’s a real mixed bag much like the Kunstlergruppe album – nice guitar ballads, electropop songs and uncategorisable tunes nestling alongside coarse and ugly one-joke noise recordings. Raimond appears with Ralf Lexis, Bernard Worrick, Denise Kusiak, Peter Schuster, and many other names, and the selections may or may not have been recorded “over the span of twenty odd years”. There’s some serious talent lurking in the half-mad sprawl that is a Doc Wör Mirran album…in the quest to stay out of the clutches of the music journalist’s pigeon-holing, it seems this kind of misdirection is their best tactic.

Recipe For A Memory (Make Thirty / MT-581) does have some dates attached, and represents work from 1985 to 1993; the same names from Titties, along with Adrian Gormley, Russ Spiegel, Michael Wurzer, Volker Zippelius and John Griffith, elusive personalities dodging in and out of the fluid Doc Wör Mirran collective. The cover art for this one made me think of Karel Appel. The music is great too. I think ‘Die Berge Der Indianer’ is one DWM effort most likely to be mistaken for a Can bootleg, while ‘Remonstrancing A Taboo (Version 2)’ is the sort of techno-festival cosmic mush likely to have found favour with 1990s ecstasy-freaks when they rediscovered Gong and Hawkwind. Indeed much of the music is extremely approachable modern rock with experimental touches, and while I don’t care much for the songs and lyrics when they appear, there’s enough latterday Kraut groove here to make this one well worth investigation.