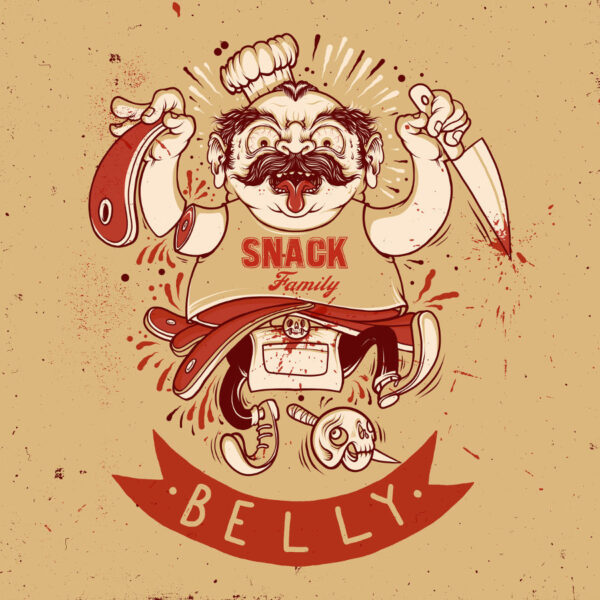 We have noted Andrew Plummer’s works briefly in the past – the bizarre songs of World Sanguine Report are enough to make anyone sit up and take notice, and Plummer cultivates his status as a sort of English Tom Waits / Captain Beefheart sea-faring eccentric type. Another band he plays in is Snack Family, with drummer Tom Greenhalgh and sax player James Allsopp; their Belly EP (LIMITED NOISE LTDNSE5) may not be especially “avant”, but is an extremely visceral and eccentric take on the sort of evil swamp blues we might associate with Dr John, crossed with ingenious off-beat rhythms and deliciously spare playing from the side musicians. On the title track ‘Belly’ you’ll feel like you’re being compelled by a malevolent witch to eat your last meal of poisoned chili beans; you can feel indigestion setting in already, but you can’t stop shovelling food in your mouth. Drew Millward made the cartoony Grand Guignol cover art. Not safe for vegetarians. From 4th March 2014; they made one other EP that year (Pokie Eye).

Last noted Vladislav Delay with his 2012 Kuopio album for Raster-Noton where Jen noted his “nervy beats”…his Espoo EP (RASTER-NOTON R-N 141) experiments further with beats and loops, and intends to set-up maddening cross-rhythms that are had to follow. It’s done with filters, modifiers and echo effects, but the equipment precisely controlled; you can tell on the finished product that there’s not a single digit out of place, in the inhumanly exacting patterns that have been so ruthlessly enacted and executed. Vladislav Delay explicitly intends to create conceptual music, yet he doesn’t want to depart too far from the disco dance hall. These ingenious mesmerising pound-a-thons ought to present quite a challenge to your average hoofer. I like the way he disguises his severe conceptual ideas; the sound of this record, for instance, isn’t too alienating, and indeed ‘Kolari’ has a user-friendly ambient setting that cushions the blows from these steely and devilish beats of high complexity. By front-loading his work with semi-familiar and approachable sounds, perhaps he stands a chance of smuggling his subversive ideas into the mainstream of dance culture. From 3rd July 2012.

Beautiful and transcendent droney-violin and synth sound art thing from Marielle V. Jakobsons and her Glass Canyon (STUDENTS OF DECAY SOD097). For this project, painstakingly created over a number of years between 2009 and 2011, this Oakland artist decided to reduce the process to just violin and synthesizer, mostly to explore the sonorities of “where two timbres meet”. The simplicity of the process conceals a lot of complexity; somehow you can tell there’s a great deal of preparation, forethought and composition that has been fed into each of these gorgeous long-form stretches of sound, and she’s not simply letting her machines run on autopilot. This seems to be the first work released under her own name; the curious listener may wish to investigate her Ore record from 2009, released for Digitalis as Darwinsbitch, and she’s also led the groups Date Palms, Portraits, and Myrmyr. From listening, and from titles such as ‘Purple Sands’ or ‘Dusty Trails’, it’s clear she’s a landscape painter in sound, and her multi-media practices involving art installations would seem to conform this; her intention is to create a “visceral experience of sound and light”. I think ‘Purple Sands’ and ‘Cobalt Waters’ are among the finest pieces here, with incredibly subtle shifts in tone, mostly staying in a very pleasant and beautiful place and allowing us to contemplate it; for a few precious moments on ‘Purple Sands’, there’s one of the most mournful and affecting violin tones I’ve ever heard, like the cry of a bird. ‘Dusty Trails’ has a synth sequencer rhythm and somehow seems a tad more conventional, stylistically tipping its forehead towards Tangerine Dream, but that’s a small quibble when faced with such an original and sumptuous album. From 3rd July 2012.