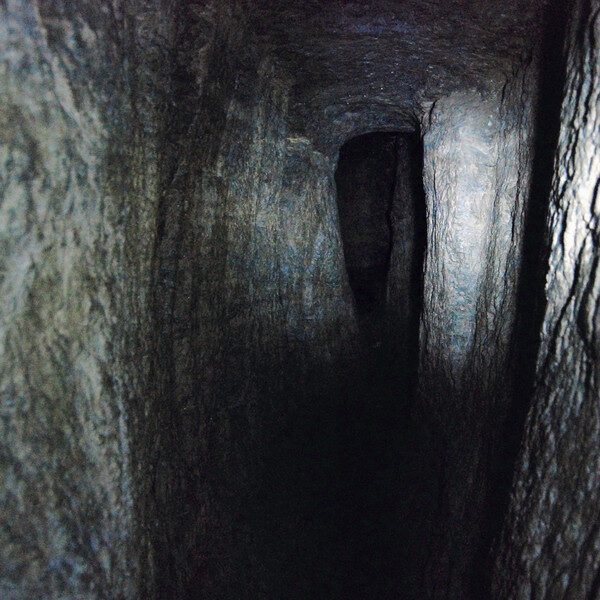 Here be the latest dubby sound-art suite from Portugal’s finest contemporary composer Jonathan Uliel Saldanha, called Tunnel Vision (SILO003LP) and released on the Silo Rumor label. He recorded it in various caves and caverns around Porto. I had no idea there were caves in Porto, though when you Google for information abou this you mostly get guided tourist visits to wine cellars, which makes sense, or at any rate is something that’s bound to be popular. On this dramatic and dynamic music, Saldanha revisits his preoccupation with dub music, which has previously been evident on the record he made with HHY & The Macumbas, called Throat Permission Cut, in 2014. The composer boasted of his “space-age voodoo dub constructions”, and referred to the echo studio effect as “Skull Cave Echo”, a fanciful term he continues to use on Tunnel Vision.

We hear such a wide range of instrumentation and vocals on Tunnel Vision I found it hard to believe that it was indeed recorded in caves, as doing so would seem to entail assembling a small orchestra of percussion instruments and a large choir packed in a cramped narrow space, under conditions where most musicians would start charging double rates. In fact it was made by a small ensemble. It might be the mixing and editing stages which contain the processes that are most relevant. What ends up on the tape – I continue to regard him as a “sound painter” along the lines of Teo Macero – is a strange intoxicating melange of wailing choruses (vocals by Jessika Kenney, Mike Ladd, Catarina Miranda and Raz Mesinai), performing like a demented Greek chorus; trumpets and woodwinds (played by Álvaro Almeida) producing forlorn fanfare effects that are the exact opposite of triumphant music; and no end of wild percussive and drumming moments (João Filipe and others), punching home the excitement of the musical narrative. Where previous works of JUS have owed some debt (large or small) to the dancefloor, this one is all art-music through and through. It comes within an ace of being an avant-garde opera, compressed into some 40 minutes; perhaps Saldanha should attempt such a project, unless it’s in danger of being too pretentious, and assuming he can find a suitable text.

There’s a movie of the same name, an experimental science fiction film directed by Raz Mesinai, said film endorsed by John Zorn and released on his Tzadik label. The present release is a “re-edit and remastered version of the original soundtrack”, originally released in 2013. Tzadik’s blurb for this stresses the infernal nature of going into caves to make music, and relishes the thought that Mesiani and Saldanha “descend[ed] far below the earth’s surface into some of the oldest, and darkest underground tunnels in Europe.” In like manner, the label Silo Rumour cherish the “use of resonant spaces”. From 19 April 2016.