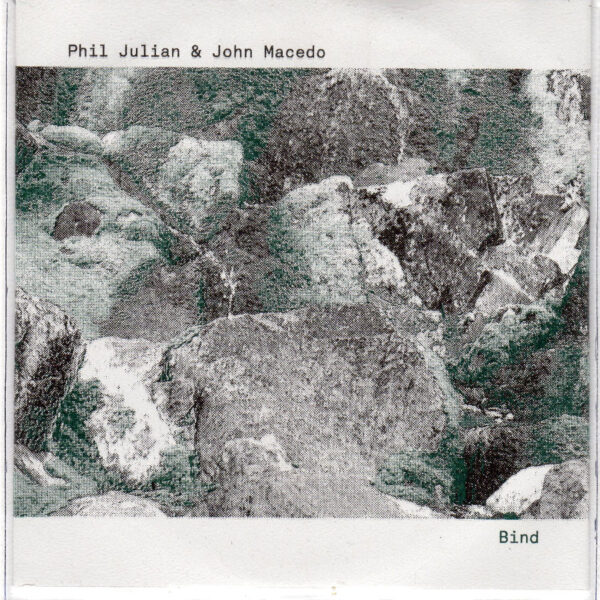 The latest item from UK’s Hideous Replica label is a CD called Bind (HR12), a collaboration between Phil Julian and John Macedo. Arrived here 24 May 2016. The front cover looks like a degraded photograph of some rocky outcrop, overprinted with a subtle green tint, suggestive of algae or lichen growing on those rocks. In like manner, the very abstract sound art we hear on the disc could be read as a form of digital micro-growth, organisms thriving on an inhospitable surface.

The prolific and highly able Phil Julian last showed up here in 2015 on Between Landing, an understated crackly record he made with Ben Owen, but he’s rattled his circuits with some of the best names on the mountainsides of avant-noise, and in many diverse contexts. John Macedo is a London sound artist who has released a few cassettes and CDRs, some on his own Black Plume Editions label, and owns himself a devotee of analogue electronics, hand-made devices, and close-miked objects to create his sounds. The pair performed together at Cafe Oto in 2015, the results issued as a live tape by Wasted Capital Since 2013, a sub-label of Hideous Replica.

Bind contains zero information as to how it was produced, other than the vague remark “recorded at various locations in South East London 2013-16”. Although generally a quiet and unobtrusive set of crackling squiggles, it offers a “continuous” experience rather than a disjointed one, continually drawing the listener in to its small confines, as we fall further down the rabbit hole and are squeezed along many narrow passages. There’s an eerie fascination to the subdued drones, the unexpected squeals and ticks; we might be watching small unknown life-forms multiplying in ways we can’t understand.

While most of the 11 track titles are utilitarian and provide few clues, I do like the title ‘Another Burden on the National Grid’, which suggests something about the excessive power consumption of this duo (despite the minimal audible output). It also passes on a wider awareness of how they see their activities plugging into a whole network of dependencies and resources. Perhaps they see their errant alien signals as ghosts in the bloodstream, humming along the cables from pylon to pylon, until they reach their intended destination.