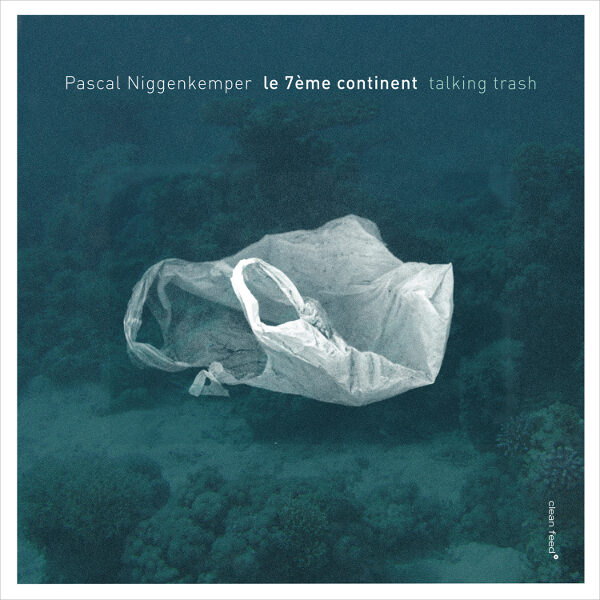 Impressive and inventive improvised / jazz / composed music from Pascal Niggenkemper, a French-German bass player appearing here with his new sextet Le 7eme Continent. The album Talking Trash (CLEAN FEED CF373CD) contains a wealth of musical ideas, allowing space for free improvisation within certain grids and frames, and the attention to dynamics and tension-inspiring gaps is remarkable. Niggenkemper is well served by his fantastic team of players, including the woodwind player Joachim Badenhorst (with whom he also plays in the trio Baloni), Eve Risser and Philip Zoubek with their two prepared pianos, plus the sub-contrabass flute of Julian Elvira and the clarinet of Joris Ruhl. Notice that’s an all-acoustic line-up, although it seems the woodwind team may employ some amplification; the majority of these strange and alien noises are all generated by human action, breathing, bowing and plucking movements.

Talking Trash is a concept album of sorts, based on Niggenkemper’s reading of alarming news reports of what’s happening in the Pacific ocean these days…apparently we’re dumping so much garbage in the sea, it’s practically formed a new continent of detritus, described by a note here as “an artificial world, in the midst of the ocean, accidentally created by men” and nicknamed the Seventh Continent. “It made me think…” states Niggenkemper, reflecting on the lamentable piles of non-biodegradable plastic we’re stacking up in gargantuan proportions; and as his way of dealing with this depressing “absurd reality”, he created these compositions. It helps to draw our attention to this aspect of world pollution. But he also wanted to create a living sound-portrait, a moving painting in sound, depicting the continent of rubbish and its undulating actions. The accuracy of his snapshots is informed by a pessimistic undertone, highly critical of the horrible wastage we tolerate under advanced capitalism.

Among the many notable musical moments: ‘Gyres Oceaniques’, a striking conversation between the two pianos, one of them providing a solid percussive backdrop while the other executes wild free jazz runs and trills; dark tension and open spaces (voids and vacuums) yawn terrifyingly. ‘Plasticsphere’, a long and melancholic drone piece of understated beauty, where the harmonics of the bowed strings create an oceanic swell, dotted with minimal piano tinkles and whimpers from the woodwind section, making us weep at the imagined sight of a forlorn plastic bag drifting hopelessly in the sea. The second track, whose title is an elaborate grid reference, exhibiting the Evan Parker acrobatics of the clarinets supported by an exquisite piano figure. ‘Ideonella Sakaiensis’, a perturbed squall of a piece suggestive of a storm at sea, amply demonstrating Niggenkemper’s aim to “make this seventh continent sing, hiss, whirr, buzz and scream”.

Talking Trash is a superlative album of contrasts and tensions: abstract soundscapes alongside dense free jazz note-clusters, narrative environment-portraits, taut well-arranged and composed rhythms with free-form blowing and scraping. The sextet perform immaculately and cannot put a single foot wrong, and the recording by Christian Heck and Stefan Deistler is vivid and clear, creating a great-sounding record. Full marks and highest recommendation for this exemplary example of cutting-edge improvised-composed and well-crafted music. From 22 June 2016.