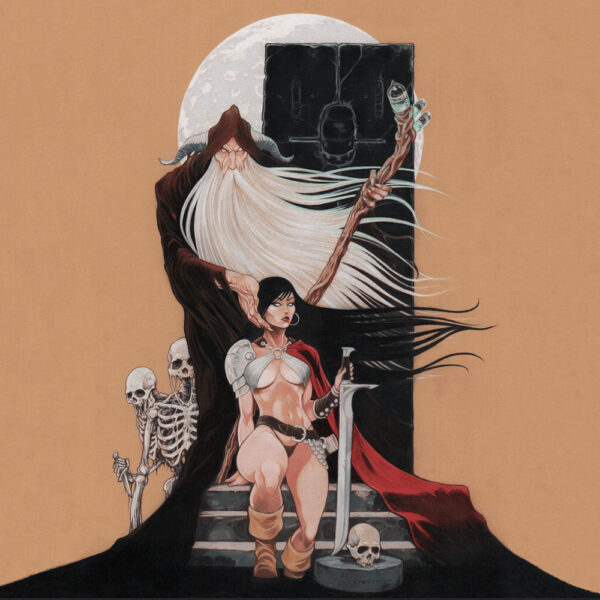 The debut album from Denver band Khemmis (cool name!), which the guys released in 2015 on trusty doom label 20 Buck Spin, “Absolution” isn’t quite my cup of coffee for various reasons so I’ll try to be brief. Khemmis deal in a style of heavy gritty doom sludge mixed with classic melodic rock riffs and tunes: plenty of lead guitar soloing is to be found throughout the album. Song lyrics have an apocalyptic edge to them and there are visions of an unyielding God enforcing His pitiless law on imperfect humans.

First track “Torn Asunder” is a lively and energetic song with jagged riffing and crunchy fuzz-guitar tones. From then on, the songs settle into a slower pace and it’s from this point on that I must admit the album has lost me. I’m not sure why every time I try listening to “Absolution”, my enthusiasm starts to flag. I have to say the clean vocals, wherever they appear, seem very out of place in music that’s heavy and grinding with riffs the size and weight of tombstones. At the same time, the more gruff and raspy voices, acting as counterpoint to the clean choirboy singing, are shouty and come off as pretentiously macho in a way not intended by the band. Sorry guys but that’s how the singing, whether clean or harsh, comes across. There’s a one-dimensional quality to both sets of vocals and it seems that the singing tries too hard to compete with the music and needs to concentrate more on bringing the emotion and the vision out of the lyrics to listeners.

Apart from the gripes that I have regarding the vocals, the music hits a sweet spot between deep grinding concrete doom sludge miasma and a more melodic and commercially accessible hard rock style. Khemmis need to take care not to fill every moment of the album with epic melodic doom sludge bombast. Some quiet passages of ambience or acoustic guitar music would help vary the music and maintain listener attention and interest. I’d suggest that the band should concentrate either on the clean heroic vocal style or the shouting rasp, or another style entirely – a deeper clean baritone might suit – and also look at playing more all-instrumental tracks with plenty of jamming and improvisation.

As it is, the album showcases a band with good technical skills and songwriting ability in abundance. I see no reason why Khemmis shouldn’t go far with a few tweaks to their brand of doom sludge / melodic rock fusion for a more individual and distinct style.