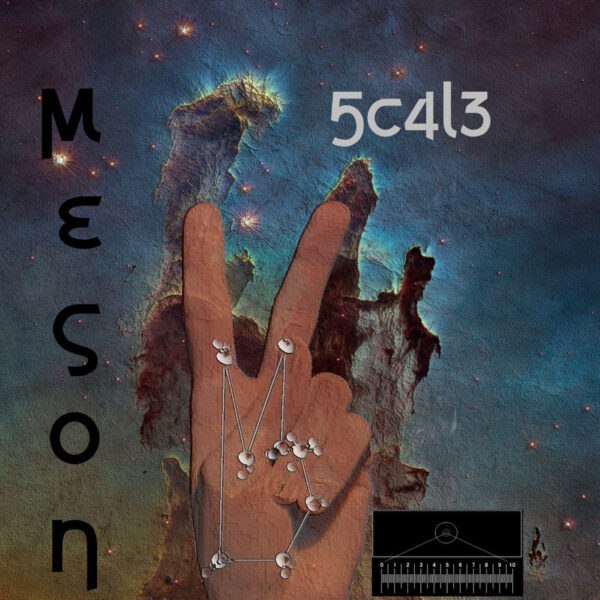 Meson is the collective name of metaphysical bard Bo Meson and an amorphous glob of hired musical help that usually expands to double figures. Strictly speaking, 5c4l3 or Scale, let’s jettison that numbers resembling letters affectation 1, comes as Bo’s debut lasering on Discus, as the Echoic Entertainment album (from 2015) was a shared project where Discus m.d. Martin Archer’s arrangements were employed as shifting back projections to the poetic/declamatory actions of the mesonic one.

The accompanying promo sheet shoehorns in ambient, ambidelic (?), free-form and improg as suitably fitting genres for this venture. Though at certain times, it can come down to an ‘all of the above’ and possibly a little bit more. I’d expect nothing less from someone who uses a word for an unstable atomic particle as part of his pseudonym. All of Scale‘s material is of an improvised nature that slumps heavily, eyes crossed, across the deep reverb/kozmik echo generator controls, clutching a P.K. Dick-endorsed blister pack of slow release capsules in its right hand. “We Traffic in Progress” with its classic analogue squeals and talk of quantum particles and the melodica-laced “Dark Matters” come almost on a default setting.

However, it’s not all centred on Copernicus, “G.Z.D.” era Arthur Brown or 90n9 dynamics (sorry!), as certain pieces travel less frequented paths. “Kem-Na Mazda” pitches mystical Jade Warrioresque exoticism against the full-bodied, classically-trained tenor of Wolfgang Seel and “Advances in Destruction by Technology” belies its attractive and serene nature with a doomy crystal ball gaze into a future where the use of artificial intelligence has led to mass unemployment within the professional classes, Could such things really happen? Only that wildly gesticulating figure behind the lectern seems to know…