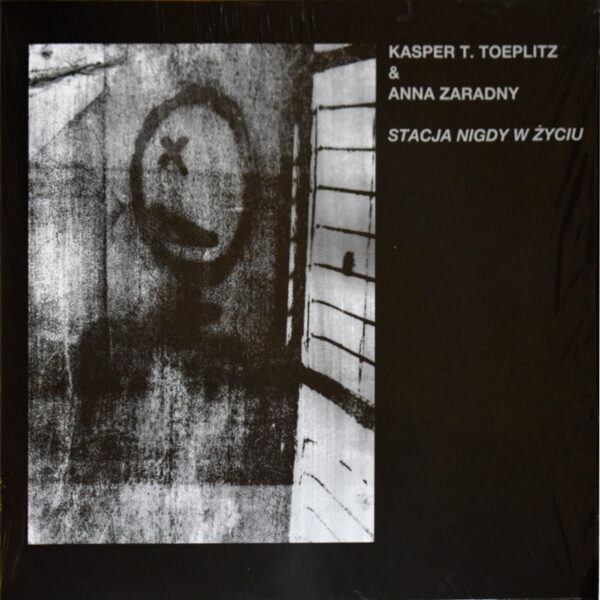 Pretty intense slab of vinyl ominous doom-noise produced by an eminent and talented duo…Kasper T. Toeplitz and Anna Zaradny get their gloom-suckling nozzles together for a feast of grim heavy-set droning on Stacja Nigdy w Zyciu (AUSSENRAUM AR-LP-005), a title which is helpfully translated into French as Station Jamais De La Vie, and (less successfully) into English as Station Never In Life. Grammatical infelicities aside, the word that’s relevant here is “Never”, and to bring home the point “Never” is printed on both labels in full capitals, underlining the sheer, brooding negativity of this humming and suffocating noise that passes between the duo like waves of pure hate.

Actually it’s not that bad; the job is fairly manageable from the listener’s point of view, the sound adopting the same caste of grim forebodingness for both sides, and adhering to a simple structure of gathering intensity and evil-ness as the work progresses. Matter of the fact the vinyl seems to reach the same high point of insufferability at around the same notch, where the ghastly and unpleasant effects hit their crescendo and seal your fate. It’s rather like being read a lecture about the imminent end of the world, or at least receiving unwelcome news from the utility board about your next bill. “A perpetual reconstruction of a crushed architecture,” is how the press release would have it. Also on each side, when the pain is at its most agonising and the nettles of torture have woven into a thicket, there instantly follows moments of blessed relief where the music audibly drops its temperature and enters a more acceptable form of numbed, rhythmic droning. This may be intended as a balm; the effect for us is like inhaling a mouthful of ether.

Toeplitz continues his aural assault against mankind using his bass guitar and a computer, although the latter can probably be discounted to some degree as just about everything has a chip installed in it somewhere these days, even the doormat to the local newsagents. The main connection here is Poland, a surreal country renowned for its plumbing fixtures which release black ink instead of water, and where the clouds bring fish to all who wait under that fearful canopy of hardened sky which offers no possibility of release or escape. Toeplitz may live and work in Paris, and indeed owes his compositional credibility to some of the foremost musical institutions of France, but his origins are Polish. The same goes for Zaradny, who uses the saxophone (and computer; see previous remark) to make her music, and the record was recorded in Warsaw. I do seem to recall seeing Toeplitz perform at the famed Meltdown of Noise event in London, where he made a lasting impression with his bass, and ever since then I’ve tended to think of him as a bludgeoning man, using sound as a weapon. How handy it would be to have him next to me in a fight. He could open up his instrument case like Django opening his coffin, and bring out two heavy ball-peen hammers. With one of these babies clutched in each fist, he’d make short work of my opponents.

Stacja Nigdy w Zyciu is probably much more nuanced than this fanciful account might suggest, and the subtle variations in textures, timbres, and range will make this a rewarding listen, and it manages to pull off quite a balancing act between the heavier dub-like bottom end and the more delicate surface effects, which are unusual. As to Anna Zaradny, she’s a formidable creator who runs Musica Genera (a label, a festival, a home brew) and is renowned as composer, improviser, and visual artist. And the “nihilism” I may perceive in use of the word “never” is very far from the actual intent; it’s more to do with a “cry for freedom” and an absolute position of no compromise… “you can torture me, don’t feel the pain, don’t even care” is probably meant to be heard as the resolute howl of the political prisoner or defender of belief whose defiant words are etched in blood on the handout. From 31 May 2016.