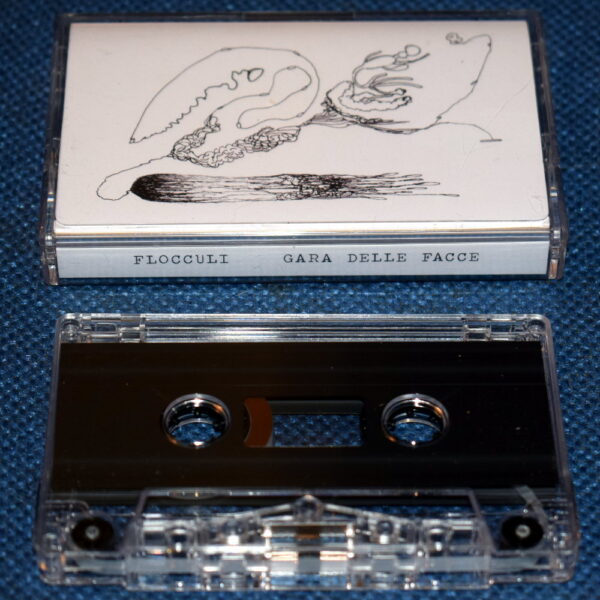 About a jillion points shall be awarded to the cassette Gara Delle Facce (TUTORE BURLATO #09) performed by the trio Flocculi. Its members Devid Ciampalini, David Lucchesi and Ezio Piermattei turn in a two-part performance across both sides of this short tape and in the process they defy human reason with some of the uncanny zany sounds that emanate from their agitated bodies. Percussion, oscillators, guitar, voice, tape and objects are all used in imaginative ways to maximise a sense of the bizarre and a sense of fun in equal proportions, and the spirited nature of their antics doesn’t let up for a moment. I suppose there could conceivably be a danger that this form of free and open playing could easily become self-indulgent and even “wacky” in a meant-to-be-funny sense that doesn’t translate; or it could become an exercise in forced “energy” music which degenerates into the usual skittery-improv chaos and clatter. Amazingly, neither scenario comes to pass and the music remains light and fleet-footed. This may be because none of the musicians are trying to prove anything about such unhelpful notions as “extended technique” or the “value” of free improvisation, and are simply playing together in ways they enjoy. But I speculate. Ciampalini is unknown to me, and Lucchesi the guitarist has surfaced on an obscure CDR as part of DeA in 2014; but Piermattei is of course more familiar to us, not only as the owner of this tape label but as Hum Of Gnats, poisucevamachenille and Autopugno, aliases under which he has made unique and funny records which to one degree or another exhibit his obvious facility for making uncanny sounds and music with his voice, and his tape overlays. Flocculi is yet another project he can be proud of. They may never surface again as a trio, but for 30 delicious minutes here they have unleashed several exciting and tasty events in sound upon the earth, with an obvious passion and enthusiasm for their work, and everything is played with a simple transparency which is highly refreshing. Things may get noisy, but never distorted; the spirit is liberating, never chaotic. The title translates into English as “Race Of Faces”, and that’s putting it mildly. Highly recommended!