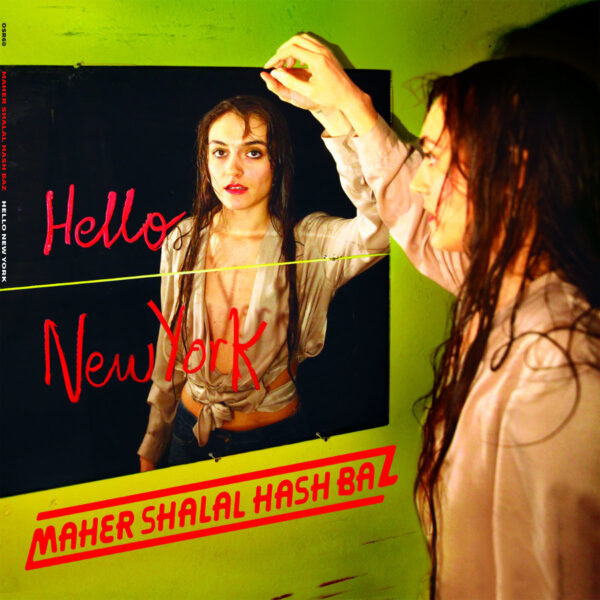 Hello New York (OSR TAPES OSR60) is the “American” album, I suppose, by Maher Shalal Hash Baz, that highly eccentric Japanese band led by Tori Kudo that continues to baffle listeners across the globe. I think they may have caused a flurry of interest in the UK around 2000, when Stephen Pastel started to put out some of their records on his Geographic label, but copies of these never reached us. Matter of fact we don’t seem to have been graced with their music since 2009, when we heard the bizarre double CD C’est La Dernière Chanson which was recorded with the help of some local French players. It comprised over 200 songs, a fact I mention just to remind you of one of the many quirks of the Maher Shalal Hash Baz approach to playing and recording songs.

The tradition of “working with the locals” appears to continue on Hello New York, as he’s joined by some American players including Christina Schneider and Zach Phillips from CE Schneider Topical (Zach is also the owner of OSR Tapes), and clarinet player Arrington de Dionyso who has amazed us in the past with his wild solo records and with the group Old Time Relijun. How did Tori Kudo feel about playing in New York? “One of my dreams has come true,” he states on his modest sleeve note here, worried about whether his voice carried well when he said “hello New York”. Did he say it to an audience? These are live recordings, in case you were wondering, but done in a studio in Brooklyn. Packed crowd of eager fans at Madison Square Garden next time, let’s hope.

I can see why civilians struggle to listen to the music of Maher Shalal Hash Baz; clearly it sounds as though it’s being played “badly”, and when writing about it I always reach for the metaphor of a school band attempting to do easy-listening music. But it’s done this way deliberately, and the odd arrangements are what gives the music its character. Even so this particular record might be a way in for many listeners, as it’s got something of a rock vibe; for one thing, they set out to cover a Velvet Underground song (‘Sweet Jane’, rendered here as ‘Dulce Juana’), and at least half of the tunes resemble VU songs and jams that never existed. This may be because of the large number of guitar players who are credited on the sessions – eight in all, including Kudo. But it’s also endearing and exciting to hear the band attempt even the simplest rock syncopation in their rhythms, only for it to come out extremely clunky, with the percussion, xylophone and clarinets soon revealing their shortcomings when it comes to playing streetwise rock, or even gentle loping Indie-rock rhythms. This may be one of the things Pastel found so appealing in the first place. It certainly grows on you.

Playing ‘Sweet Jane’ is Kudo’s way of greeting New York, by paying homage to that most New Yorkian of rock bands. It’s clear he not only loves the band, but he’s taken every one of their recordings to heart in a way that shames even the most dedicated VU collector-nutcase; his rendition of ‘Sweet Jane’ is not only accurate and complete, but also a radical remake; it reveals unexpected nuances and meanings in the song. The song is echoed, I would claim, by a song which proceeds it on side one, called ‘Haarp’, which is dominated by Schneider and Phillips performing the sort of snappy off-colour repartee which Lou Reed would normally have carried out by himself, playing all the parts in his dramas of seedy low-life.

Kudo’s other way of greeting New York is to have played some John Cage music, apparently. Good move, given Cage’s position as some sort of patriarch of the New York school. I don’t know if this high experimentalism of Kudo shows up on the grooves. We do have some of his characteristically odd compositions, such as ‘Banksy’, scored for woodwind and percussion – less than a minute of deliciously perplexing gentle notes arrayed according to a weird logic. It’s not easy to summarise this elusive music, but one key characteristic is “brevity” – short tunes that end as soon as they begin, leaving many question marks at the end, although the longer workouts such as ‘Miss You My Baby Doll’ and ‘That’s All I Would Get’ tip the balance in the opposite direction, making their one simple point over and over again. Another key characteristic is “everything playing at once”, by which I mean no solos and no single instrument is especially highlighted. Great polyphony. Yet it coheres, and we can hear everyone clearly in a delicious jumble of music. One senses it takes some discipline and talent to be able to keep this many musicians under control without producing a horrible noise. There is an anecdote about Phil Spector and his enormous studio bands…which I’ll save for another time.

This endearing record feels more “chaotic” (in a good way) than the few Maher Shalal Hash Baz recordings I have heard, so perhaps Tori Kudo picked up some of the “energy” of New York that everyone talks about. It’s reflected to some degree in the back cover photos of the sessions, created by Christina Schneider, brilliantly collaging and overlaying her own images. A riot of colour, instruments and stands everywhere; almost like a dream in miniature of the Arkestra. Kramer (of Shimmy Disc fame) did the mastering, and the LP is 53 minutes long! From 19 May 2016.

30th January update: many thanks to Ed Walsh, who points out this cover is a pastiche of a 1973 LP by Silverhead.

6th March update: many thanks to Zach for pointing out it’s Christina & Arrington doing the vocal back-&-forth on “Haarp”.