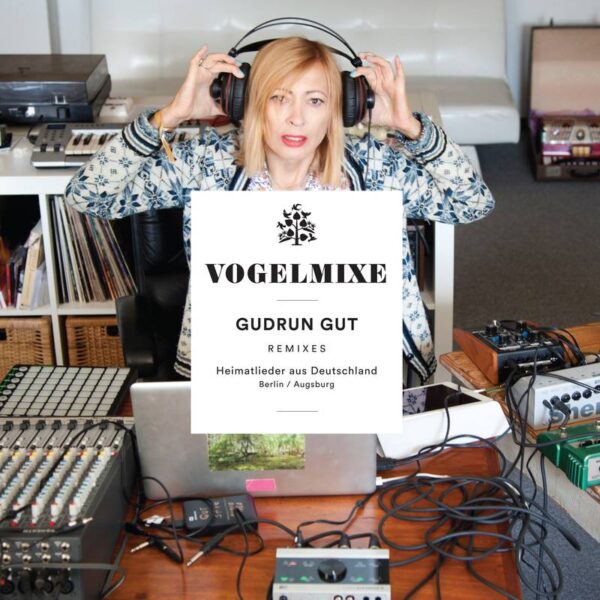 As part of Heimatlieder aus Deutschland, an initiative funded to shed light on the ethnic and musical diversity of modern-day Germany, producer Gudrun Gut has been commissioned to set up symmetrical, speaker-friendly setlists of eight re-recorded ‘traditional folk’ songs for the magpie-minded Vogelmixe; going on to give each a rhythmic makeover into the bargain. While first impressions suggest this pan-global melange is more vapid-minded cocktail bar than boudoir, Gut’s choices are apparently as informed by history as by personal taste: each of the songs tracing its ancestry as far back as the 15th century to nations to have immigrated to Germany and which can thus be regarded as contributing to the country’s current ethnic identity. Each nation (Turkey, Cameroon, Morocco, Croatia, Cuba, Portugal, Transylvania and Bulgaria) is also represented in the pool of musicians to perform the ‘original’ songs; the streamlined format of which ensures that such ‘confusing diversity’ will in fact prove pleasing to listeners with and without a studied interest in the multi-coloured purview of the much-loved ‘world’ music label.

While this visible striving for authenticity might seem at odds with the remix disc’s aesthetic of electronic beats and textures and melodic extrapolations, it’s just as easy to reflect on the ‘cover tune’ simulacra nature of the pieces themselves. These aren’t preserved in amber, but subject to the prerogative of whomever happens to bring them into the present moment, though by all accounts a good deal of care went into sourcing musicians as part of ‘an extensive research and recruitment process’. The underlying theme of ‘unity’ putatively runs through all songs as expressions of a trans-continental ‘melting pot’, bringing dynamic equilibrium to which must have been a task for the compiler, but who better than the DJ to effect such a transfer?

One further motive of the remix treatment is to address the supposed lack of representation of traditional folk music in modern German electronic music. Qualifications regarding cultural appropriation aside, Gudrun’s remixes are both inventive and light of touch, making adroit use of dub, club and electro-pop motifs. Her poly-stylistic subtlety is not completely removed from that which made Honest Jon’s Shangaan Shake selection such an interesting event, though it does lack that collection’s the producer headcount advantage. Under Gudrun’s watch, generic 4/4 beats collide into thorough deconstructions, tightly-wound Thomas Brinkman-sized samples loop-based rhythms and an almost hymnal resonance that bleeds from the past into the present. While not every piece is likely to please every listener, it is nonetheless a tasteful arrangement that can be enjoyed from many a distance.