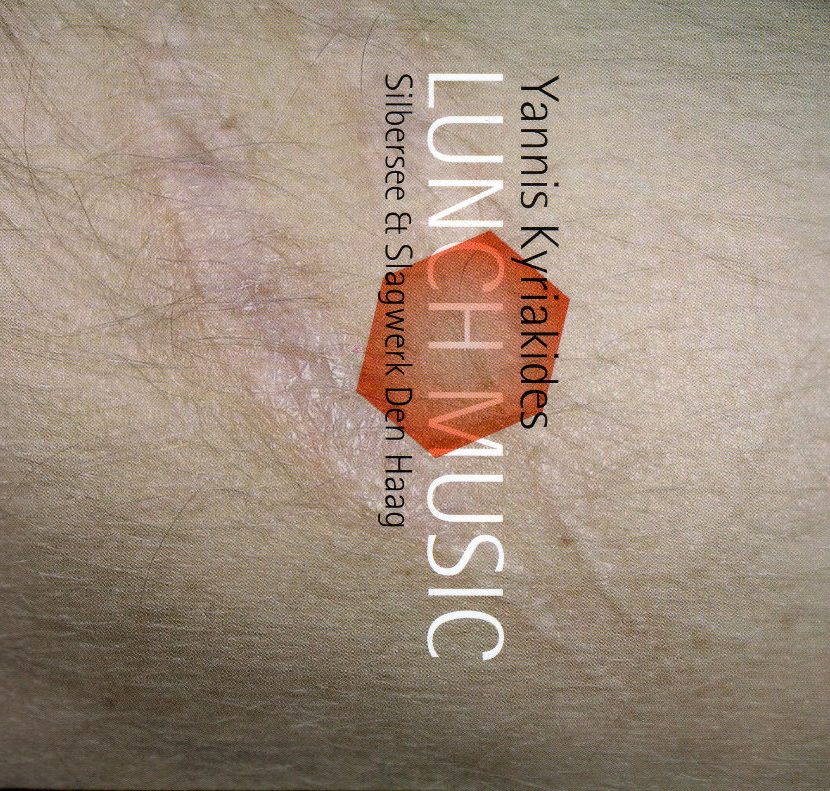 Writing in 1971 about William Burroughs’ then-latest book The Wild Boys, reviewer Albert Kazin [1. This and all subsequent quotations are taken from the same review.] could easily have been anticipating this novel collaboration – almost five decades on – between Cypriot electroacoustician Yannis Kyriakides, Dutch percussionists-for-hire Slagwerk Den Haag and ‘contemporary vocal specialists’ Silbersee, when he remarked that Burroughs ‘gets astral kicks by composing in blocks, scenes, repetitive and identical memories galvanizing themselves into violent fantasies, the wild mixing of pictures, words, the echoes of popular speech’. In fact, he might as well have written this very review.

Though based on Naked Lunch’s dense and confounding narrative fugue, in Lunch Music Kyriakides has taken stock of the many ‘straight’ accommodations of Burroughs’ work over the years and sent them packing: no samples set to trip-hop nor dour thespian recitals here: ‘Smell Down Death’ signals this fact by mulching WSB’s dry croak into a queasy quicksand in the opening minutes, from which state it never quite recovers. He follows suit with the text, filleting all ‘rational’ syntax into words, syllables and vibrations in a ‘polyphony of voices’ that’s expected to approximate a reading of the book. In a pleasing convergence of scientific method and artistic inspiration, this digital arbitration was achieved by applying a frequency analysis algorithm to the text to determine its most commonly used nouns. No prizes then for predicting that lexical items like ‘boy’, ‘ass’, ‘cock’ and ‘death’ form the book’s rhythmic foundation and thus that of what we hear.

‘Words, horrid isolate words, those symbols of our enslavement, are replaced by the a-b-c of man’s perception of simultaneous factors–the ability to drink up the “scanning pattern”.’

Silbersee, like a well-lubricated (soft) machine, regurgitates this as grammarless glossolalia with a honeyed bounce to their vascular lyricism; chewing on words with the gusto of nightmarish Beach Boys on Groundhog Day. Their repetition of solitary words annuls all connotation and supersedes much of Slagwerk Den Haag’s physical percussion, as in ‘Boy’, where the eunuch mantra-fying of said signifier magnifies the grotesque comedy of the subject. ‘But repetition, that fatally boring element in Burroughs’s “cut-ups,” turns the coupling into an obsessive primal scene that never varies in its details’.

Compounding such in(s)anity, ‘La La La Terminal State’ closes the set as the heat closes in: the moribund choir locked in a loop of unlovely ‘La’s while a world driven mad by insectoid whirring and kosmiche ascension squeals to a stop; while mumbles of WSB-as-godhead make one last attempt to corrupt corporeality. Along the way, electroacoustic processing is pitted against Kalahari work songs; radiant radio static rains from open windows onto chattering street urchins; shotgunned spraycans reform in reverse time. Any part of this corroded tableaux might have been spliced into a Moroccan marketplace in Naked Lunch – the chaos is discomfiting, but reassuringly authentic.

In the spirit of reverent desecration, Kyriakides spears the mutant barbershop crooning with snippets of ‘50s pop hits like The Brothers Four’s ‘Greenfields’, which dissolves and devolves likewise into a vomitous assemblage of fruitless plucking and digital churn. Kazin diagnosed what is ‘essentially a reverie in which different items suddenly get animated with a marvelously unexpectable profusion and disorder. Anything can get into it, lead its own life for a while, get swooshed around with everything else’. As if part of a throbbing organism with the connectivity of Interzone’s gelatinous membrane walls, the voices speak ‘through one another’ in one glutinous mass: words within words within words – a vehicular pile-up process Kyriakides terms ‘mediumship and possession’.

To outward appearances, such shamanism is a messy business, where qualitative distinctions become indistinguishable ‘…like the embroidery of a cruel dream’. Naked Lunch is an uncomfortable read at the best of times, and Kyriakides is due kudos for neither concealing this fact nor reducing his interpretation to a linear event, as did David Cronenberg’s film adaptation. Whether for legal reasons or those of reverence though, his decision not to name the project directly after its subject does suggest a lack of conviction in his methods, which are experimental at least by the standards of others who’ve burrowed into the same works. By filching the master’s methodology – ‘inserting one scene into another, turning one scene into another’ – and remixing the text as a collage of suprasegmental sound, Kyriakides cuts to the novel’s filthy heart the way others haven’t.