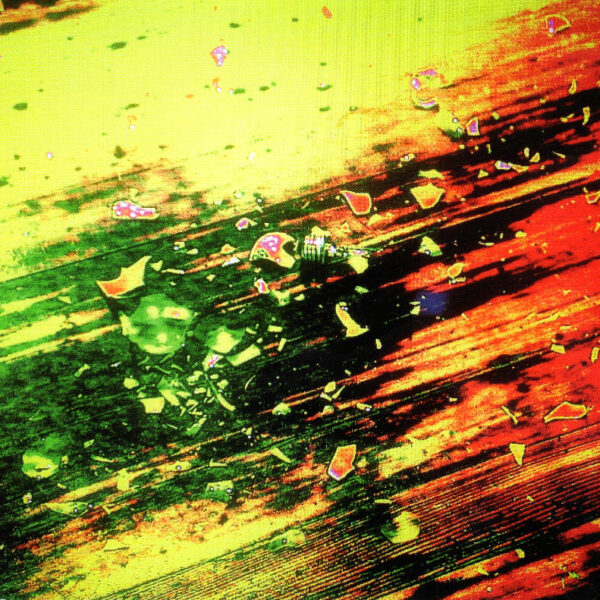 Fine blast of art-noise with a punky edge from the Peter Aaron / Brian Chase Duo, an American pair of seasoned players who only met up a few years ago in 2013. On the same occasion as their first live outing, they also booked a recording session at an old church in Hudson NY and recorded Purges (PUBLIC EYESORE 134), an intensive set of vigourous music created by means of guitar, drums and electronics. The longer tracks with names like ‘Space’, ‘Rolling’ and ‘Swirl’ are more easy to locate in the improv-exploratory noise zones, and they are sandwiched in between the numbered ‘Purge’ blasts, which are short punky guitar explosions usually around a minute in length – clearly the players intending to “purge” themselves of all bodily poisons with a voiding, puking action.

It’s impressive to hear this much confidence and swagger on a debut, but the pair have long histories; Peter Aaron, from Cincinnati but known in New York and New Jersey, was the guitarist and singer with punk band The Chrome Cranks in the 1990s, whose records are described elsewhere as “Garage Rock” and are hopefully edgy and nasty affairs of angrified electric bombardment. Chrome Cranks were pretty successful, with eight albums, lots of tours, and an MTV appearance. Aaron was also in Sand In The Face, who made one hardcore punk LP in 1986. As for Brian Chase, he’s the drummer with Yeah Yeah Yeahs (New York alt-rock band since 2000), and has duetted with Alan Licht, Andrea Parkins, and made an experimental drumming-drone record for Pogus Productions. I’d like to think that it’s these credentials that make Purges such a compelling listen, a thrilling combination of raw punk attack with ideas about sound art and improvisation…the label is equally enthused, emphasising the loud volume of their sets, and the “rare uncanny telepathy” that the two share, enabling them to set up and start playing without any fussing over sound checks and balancing levels.

The digipak sleeve includes a photo of the boys in action, confirming once again you can always trust a guitarist who wears a suit. The front cover may look a bit of a mess, but it’s an image of a broken lightbulb (a motif picked up on the other artworks) which, along with the acidic colours of the printing, does much to suggest the violent power of this music. Very good. From 21st September 2016.