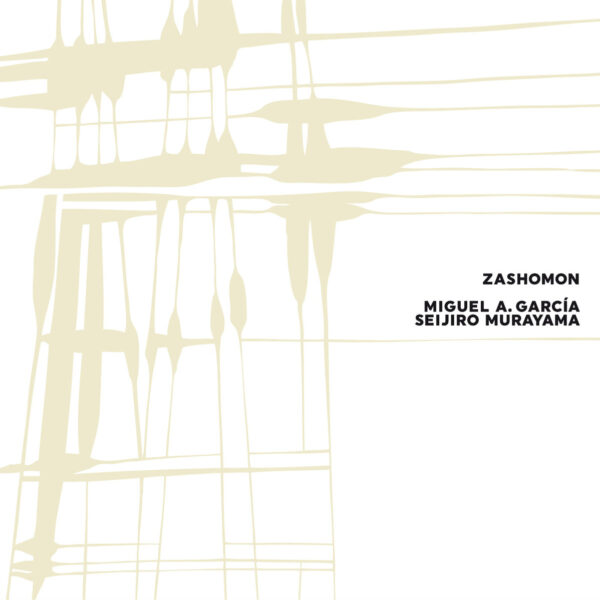 On Zashomon (HYBRIDA 06), we’ve got an exciting team-up between Miguel A. García and Japanese player Seijiro Murayama. Seijiro used to be the drummer in Absolut Null Punkt (or A.N.P.) in the 1980s, performing with the ferocious guitar monster K.K. Null, to produce some memorable LPs of experimental rock noise. He’s also performed with Keiji Haino, Fred Frith, and Tom Cora, and more recently teamed up with contemporary French improvisers and composers, including Jean-Luc Guionnet, Eric La Casa, Stéphane Rives, and Eric Cordier. Zashomon plays as a continuous 40-minute piece, although the track titles indicate a four-part structure to the work, including the intriguing third episode ‘One Perjury’…both players credit themselves with “electro acoustic composition”, and in places it does feel quite pre-arranged; the work is full of carefully managed changes and shifts in tone, allowing for quieter events to contrast with the continual stretched of rich electric drone-noise.

Early on there’s a fantastic piece of interplay between drums, synths quietly pulsating and buzzing, and what may be an electric guitar plucking occasional notes; the dynamics here are astounding, real moments of tension and vast gaps of white space in the puzzling music. After the duo settle for a slightly less bold exploration of textures and drones, but there’s still a lot of air and space in the music (especially compared with García’s default position which is to try and occupy as much space as possible), and there’s a taut mystery in the air. Murayama shows his mettle; he has that iron discipline that allows a musician to create a stern, unwavering sound, and keep the emotional register carefully in check. Consequently, his minimal percussion stabs ring out like hailstones on a wintry day, and his alien voice – a bullfrog’s murmur slowed down to the rate of a creeping snail – add a terrifying dimension to the record. At times, García is almost relegated to the position of an admiring acolyte kneeling before the feet of this high priest of minimal improvisation.

The bulk of the record presents a close-up and intimate study of…something, perhaps the craggy face of a lost tribesman or the details of an ancient monument, but it ends with about ten minutes of glorious release which creates a near-epiphany; off-centred drumming, an eerie but uplifting layered noise which may be erupting from the clouds like mutated thunder, and twisted vocal whoops from the Japanese half of the act. A very strong combination and collaboration, packed with strikingly original sounds and bold playing. Limited to 99 copies. From 19th September 2016.