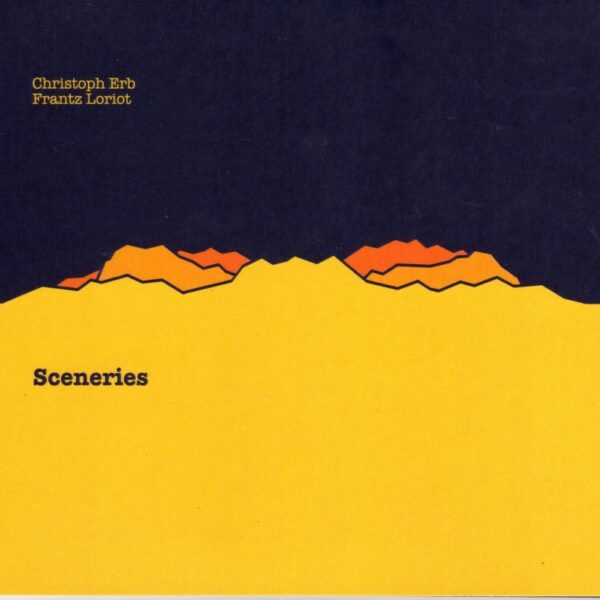 Creative Sources is a super-prolific label; due, possibly, to its founder, Ernesto Rodrigues’ curation policy of literally going into partnership with the artists on each release. It’s an interesting list of artists on their website, too. The names immediately popping out on the front page are Lawrence Casserley, Hannah Marshall and Axel Dörner and all in collaboration with other European players. Already there may be up to fifty further titles available since this item was published. This particular title is a cracking disc of free-playing, in which Messrs Erb and Loriot set up an environment of high anxiety, tension and disquiet. Sceneries is full of strident events, sudden dips in weight; as if the ground were suddenly falling away under your feet, cacophonic interludes, disconcerting melodic information appearing from the shadows like Victorian ectoplasm, only to mysteriously disappear again moments later. This is achieved with the most modest of means – Christoph Erb plays tenor and soprano saxophones, while Franz Loriot pushes himself to his limits on viola. Erb founded the Veto Records imprint, through which he has released his collaborations with other improvisors such as Fred Lonberg-Holm, Michael Zerang, Jason Roebke, Frank Rosaly, Jim Baker, Keefe Jackson, Tomeka Reid and Jason Adasiewicz. Frantz Loriot works with “acoustic &/or electric viola + preparations + fx set + tapes” in groupings such as Der Verboten, Notebook Large Ensemble and Systematic Distortion Orchestra, as well as in duos with percussionist Christian Wolfarth, and clarinettist Jeremiah Cymerman, plus other loose groupings involving Christian Weber, Christian Kobi, Theresa Wong, Pascal Niggenkemper and others.

There are five separate tracks, recorded by Daniel Wehrlin in May 2015 at a venue in what appears to be a housing co-operative in Kriens, Switzerland called Teigi Fabrik. Great interplay between the two musicians and along with moments of risk-taking there is that feeling that you only get when seasoned and experienced practitioners are in the room. What is immediately obvious is these two chaps have drilled so deep into their respective instruments that initially, it is hard to square what you’re hearing with the instrumentation they use. In an inspired move, on the second track, “Floating In A Tempest”, Christoph Erb physically moves away from the recording microphones and we hear the acoustic reverberation of the space they are using. At the end of “Annoyed Hibernation”, I imagine that Loriot’s viola is making a noise closer to that of the desperate swallows of someone drowning than any sound I’ve heard produced by that instrument before. Judging only by images on Loriot’s own website, I would suggest that he may amplify his viola as part of his technique, but this is not stated in the sleevenotes, so it may not be the case here.

To be more general, this is an area where, in the loosest sense of the terms perhaps, free jazz overlaps with electro-acoustic improvisation. The production is crisp and clear which affords us an unblinkered view of this sonic whole. The Alexander Calder-esque, or Pop Art-reminiscent sleeve design is by Carlos Santos. One of the best jazz/improv records I’ve heard in a long while – strongly recommended.