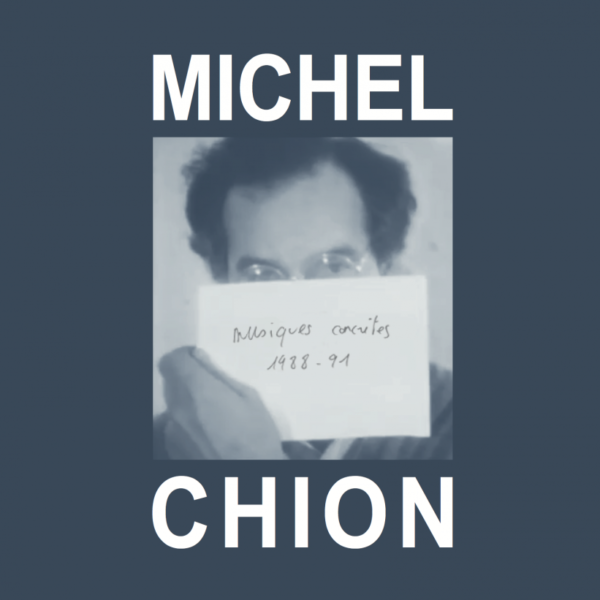 The French label Brocoli bring us another Michel Chion collection, as a follow-up to Musiques Concrètes 1970-71 which was released in 2014 (noted here). Musiques Concrètes 1988-91 (BROCOLI 019) showcases later works, but show this French GRM member was still producing abstract music in the “classic” mould of the French school. Indeed the opening segment to this disc ‘Dix Études de Musique Concrète’ from 1988 almost reads like a catalogue of methods which we associate with that studio, and emerges as a series of mysterious fragmented sound effects, lasting around 2-3 minutes apiece. Real world recordings are transformed in that analogue-rich, slightly clunky way that the students and followers of Pierre Schaeffer have made all their own; sounds leak out in a heavily processed manner, yet still distantly related to the original objects from which they were derived. It’s that muffled greyness that results from using magnetic tape, and the sharp cut-off created by sudden edits that deliberately cut into the timbre before the sound has finished. It’s not unkind to liken this music to radio sound effects, from some ultra-surreal edition of the Goon Show that never existed, and the radio play in question becomes steadily stranger as it nears the end. I noted when hearing the previous Chion collection that he was clearly not an enemy of good old-fashioned narrative in art, and I see no reason to rescind that view. These ‘Dix Études’ are real winners, but they also feel old-fashioned; they could have been produced by the INA GRM studio in 1966, 1976, or earlier. The press notes call them “obsessive pieces”, and invite us to note the “dry and liquid” sounds. I can only concur; one plausible way to read this episodic suite is as a document of a very nightmarish shower malfunction.

Speaking of “shower malfunctions”, I recently read an illuminating essay by Chion, on the subject of Hitchcock’s Psycho (in a book of essays compiled by Slavoj Žižek). Chion’s succinct appraisal of the ways in which sounds were used to convey the presence, voices and memory of the Bates Mother in that movie is a masterly assessment. I mention this to indicate Chion’s finely attuned and powerful ear, but also to praise his sense of cinema and understanding of it; his insights into Psycho were the best part of that rather far-fetched and stodgy collection of film studies.

‘Variations’, from 1991, is supposed to be a deconstruction exercise that “smashes a waltz theme to pieces”. I see that Lionel Marchetti assisted him on this piece, and you can detect how the influence of a piece like ‘Variations’ showed up in Marchetti’s own excellent work. I mean the strong contrasts, the near-silences and extremely quiet sounds that appear to be drifting in from a great distance; but Chion also exhibits a charming random logic here, almost a mosaic approach, which Marchetti turned into an even more elaborate, multi-layered strategy. It’s to do with creating an artificial sense of depth, depth in space and a freedom from the constraints of linear time. Chion doesn’t simply cut up tapes to disrupt our sense of normality, but he constructs, in meticulous fashion, a highly convincing sound-world which is part-abstract, part-documentary, and part dream-inspired. Yes, there is waltz music in here too, but somehow that doesn’t seem to be the real focus of this puzzling study.

‘Crayonnés Ferroviaries’ was composed in 1991; if I understand the composer’s notes correctly (they are written in French), he is attempting to make a grand statement about his own method and his own preoccupations, doing it through the extended metaphor of a train journey, and especially basing it on the experience of travelling by night. Accordingly we hear a mix of train travel sound effects, station sounds, and electronic music in a rich mix, overlaid with what I assume must be the composer’s own voice lecturing us with the main bullet points from an academic presentation about his oeuvre, his intentions, his life and his philosophy. It’s as much a printed manifesto of the aims of the INA GRM school as it is a compositional product of that school. Ingeniously Chion subjects his own lecturing voice to the process, and soon his words too are treated and edited, becoming processed sound amd integrated into the fabric of the busy collage. If the ‘Dix Études’ are miniatures, and Variations is a watercolour, then ‘Crayonnés Ferroviaries’ is a mural that leads the audience around all four walls of a grand lobby. While these sketchy notes may make it seem like a self-aware pastiche, it’s nothing of the sort, and emerges as one of the best “railway” suites in an admittedly not very extensive genre. The progenitor of this genre must be Schaeffer’s Étude aux chemins de fer from 1948, which in turn was used and quoted by Lionel Marchetti; while this connection is not explicitly mentioned by Chion in his notes, I am sure that a million French Musiques Concrètes fans will be nodding sagely as they hear this piece.