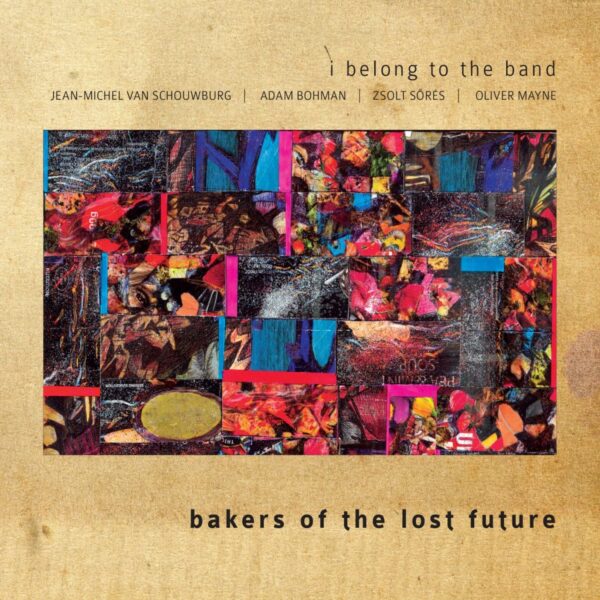 Indescribable double CD of improvised vocal noises along with non-musical sounds and eruptions…this is the combined talents of four international mavericks, i.e. Adam Bohman, the UK sound poet, performer, bricoleur and cassette diarist; Oliver Mayne, English musician living in Budapest; Jean-Michel van Schouwburg, described here as “the inimitable voice maestro”; and Zsolt Sőrés, the Hungarian musician. Budapest is the connecting zone, the area where these four met and climbed into a musical melting pot. Bohman and Jean-Michel were invited there in 2010 by the film-maker Peter Strickland, and once Zsolt Sőrés got wind of this he quickly set up an improvising situation and asked Oliver Mayne to join in. What has supposed to be a fortuitous one-off occasion soon developed into a regular event, and in the years since the four have performed together many times, now working under the strange and awkward name of I Belong To The Band. The double CD we have before us documents four such occasions from 2010 and 2013, all of them happening in Budapest, and shows the foursome captured either live or in the studio. On one occasion, a live event at Fuga, they were joined by the vocalist Katalin Ladik. Ladik’s impressive vocal work may be known to some for her contributions to recordings of Ernő Király, the Yugoslavian modern composer.

This package, titled Bakers Of The Lost Future (INEXHAUSTIBLE EDITIONS ie-004-2), shows how the combo require a lot of space and time to spread out – some might unkindly call it a sprawl – to realise their need for self-expression. Musical instruments are involved, including vibes, synths, and stringed instruments, but I get the impression that amplified objects are much more the weapon of choice in the IBTTB stable. Bohman’s a past master of selecting and hitting strange objects in the service of sound production; Zsolt Sőrés has his own personal selections, and also brings circuit-bending and dictaphone tapes to the table in his quest for the ultimate in lo-fi distortion and mangled groink. Mayne too is no stranger to clipping a contact mic onto anything that stands still long enough. Together, these three weave a cluttered but intense din of rubbly and unfamiliar textures, producing a dense soup that makes no concessions whatsoever to “art music” or jazz-inflected improvisation, nor is it as opaque and mystifying as the inert over-processed murk that Das Synthetische Mischgewebe often creates using similar methods. I haven’t heard such a compelling layered and over-crowded racket since my last DDAA listen. Over this scrambly foundation, van Schouwburg yawps out his nightmarish vocalising, a bad dream of opera singing caused by a night of indigestion at the Magyar Állami Operaház. All the pieces have been assigned nonsensical titles, word-salad arrangements such as ‘Intergalactic Gulash vs Sneezawee Gaspacho’ and ‘Gastric Samba Honkers’, as if attempting to realise the same sense of mental indigestion through the channel of literary expression. The references to food and the stomach in these titles are most fitting.

I would also single out the uncanny escapades of Katalin Ladik on the track where she features, ‘Poets of the Absurd on Chalk’. She’s pretty much carrying on an unintelligible argument with van Schouwburg as if the two were actors / opera singers playing husband and wife in a grotesque marriage, or perhaps simply play-acting a garbled version of Punch and Judy. It’s by turns comedic and ugly, yet still infused with moments of mysterious and terrifying beauty. Both the vocalists here sound certifiably insane, but they deliver their loopy barks with great assurance and confidence. We could say the same about the music, which is pretty much fragmented and bonkers in the extreme, but played with gravitas and conviction. There is no doubt in my mind that this is down to the personalities involved (very strong personalities); you could never train a classical musician to play this way in a million years, even if they had been raised on John Cage since birth. It’s an instinctive thing, and a very personal thing. The effect here is intensified because these are four like-minded souls, who have nothing to prove to the world…the music is as much a product of that bond as anything else, the sound of an amazing conversation, on which we are lucky enough to eavesdrop.

Peter Strickland, though he doesn’t play a note, is also pivotal to the record. He also happens to have been part of the Sonic Catering Band in a former life, and the strange formless non-musical performances he was responsible for are could be seen as one of the many tributaries that have flowed into Bakers Of The Lost Future. He also directed the movie Berberian Sound Studio, which used the talents of Katalin Ladik for its soundtrack, and which briefly featured the Bohman Brothers making a cameo appearance. Another gem from the Slovenian label Inexhaustible Editions, arrived 28th October 2016.