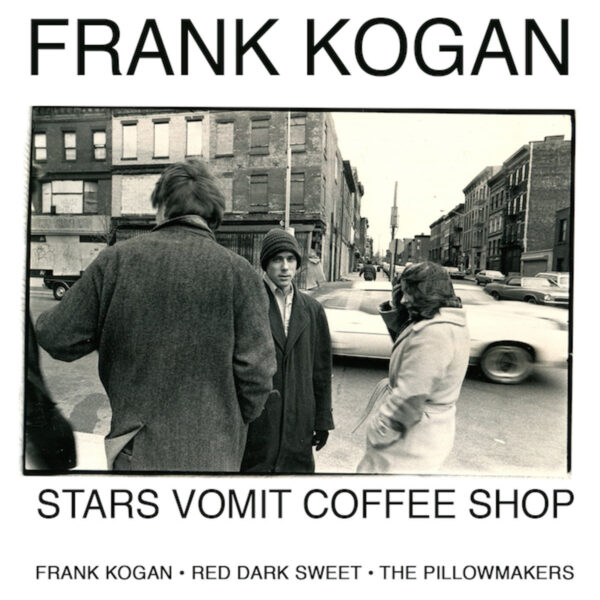 The CD Stars Vomit Coffee Shop (OSR TAPES OSR72) by Frank Kogan is a 2016 reissue of a compilation that originally came out in 1986, self-released by Kogan with annotations and now here in CD form with a rejigged cover by Christine Schneider. It’s a fab set of post-punk songs recorded by Kogan solo or with his bands The Pillowmakers and Red Dark Sweet, and covers a period from 1981 to 1984. Kogan is an unabashed fan of 1960s rock and pop music, as he admits upfront in his sleeve note, as he listened to this stuff growing up in the 1960s and gives us a long list that covers everyone from The Kinks to The Electric Prunes and The Monkees, but he also adored The Velvet Underground. You know you can trust a man who says “I couldn’t listen to ‘96 Tears’ because it upset me too much’; he tries to account for the delicious sense of alienation that was hard-wired into the music of The Rolling Stones, and their many imitators, and was drawn to singers whose voice was used as an instrument – Lou Reed, Iggy Pop and Bob Dylan.

The CD more or less charts his progress in New York as he worked his way through musical ideas that would give expression to his inner torment. He went from post-Velvets hard-lipped sneering to a wayward cross-breed of disco and punk, in the form of the trio The Pillowmakers, then found his way back to his roots with Red Dark Sweet. Kogan is a mite hard on himself and thinks his experiments don’t really come off, but I would beg to differ. In 1983 The Pillowmakers recorded ‘Linda Lu Pissed On Hitler’s Kneecap’ – Stefano Arata on bass, Carol Meinke on drums – which is a two-minute gem. It sounds like Lou Reed rapping a lost chapter from ‘Sister Ray’ to a disco beat. This song might contain trace elements of Kogan’s bid to bring “swinging blues and funk” elements to his music, after his friend Rich Campo had suggested he listen to James Brown records in the late 1970s. Kogan’s plan was to enlarge the “emotional range” of punk by crossing it with disco, and he thinks he didn’t succeed, but I’m not sure if we have any recordings from this period on the CD. These Pillowmakers tracks might not represent this period, but they are endearing and straightforward blasts of garage-enriched guitar swipes combined with elliptical syncopated bass rhythms, sure to appeal to fans of Magazine or Fire Engines. [1. Interestingly, many bands in the NDW scene also melded disco and punk starting in 1981, but Kogan makes no mention of this.]

By 1981 Kogan had met Andrew Klimek and Charlotte Pressler, and formed Red Dark Sweet – they were the core members, though drummers Donna Ratajczak, Rick Brown and John Spuzzillo also appear on some recordings. The 1982 tracks offered here were recorded on a cassette player “lying on the floor”. The songs here are closest in spirit and sound to The Velvet Underground, but it seems Andrew and Charlotte were musical omnivores with wide-ranging record collections, and showed Kogan new possibilities for freedom in the music of VU, for instance with improvisation and noise experimentation. These elements are most in evidence on the 15-minute workout ‘Mrs. Hanson / What’s That Sound I Hear?’, without a doubt their attempt to remake ‘European Son’ on their own lo-fi terms.

I like these free-wheeling and discursive Red Dark Sweet tracks, but there’s also a lot to be said for Kogan’s pop-influenced song style. The four opening cuts on the CD were recorded in 1984 and to me they’re near-flawless examples of songcraft, often delivered with just one guitar and a voice. Strong melody, simple riffs, and very concise; everything a song should be. Frank Kogan surely deserves to be located near J Mascis in the canon of American post-punk songwriters.

Hugely enjoyable CD; it’s been a delight to discover this hitherto hidden chapter of American song-based music, a chapter which might perhaps have been swept away the tsunami of 1980s punk that came in the form of Black Flag and all who followed. I’m glad that no attempt was made to clean up the sound; to me it’s like hearing a well-loved and cherished cassette tape lent to you by a friend. Recommended. From 28th October 2016.