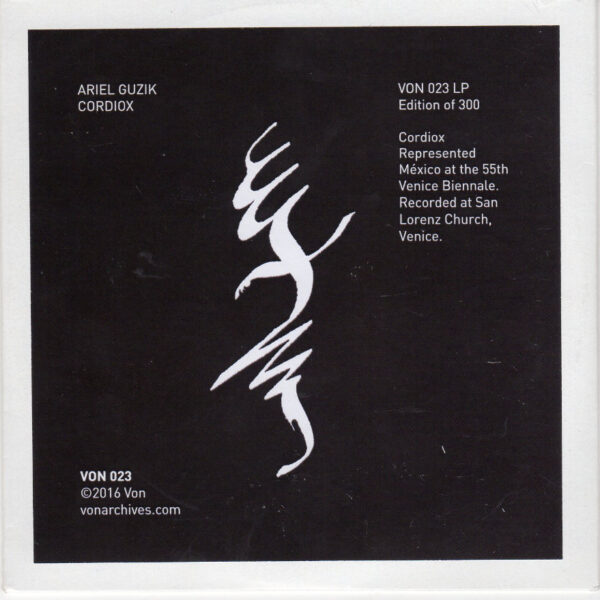 Mystical droney sound art from Ariel Guzik has been captured on the LP Cordiox (VON023), a limited edition LP from the VON label. This wasn’t really produced as an album, but it captures some episodes from a sound installation called the Cordiox which Guzik made in Venice, a 12-foot high sound sculpture which was exhibited in San Lorenz Church in Venice as part of the Biennale. The sculpture seems to be made of quartz and wires, but from pictures found online there also appears to be a wooden box with knobs, dials, and lights which looks like a Renaissance art version of a synthesizer, and may or may not have some connection with the sculpture itself. On the record are some very solemn drones and resonating purrs, with faint echoes of a chiming sound of some sort buried in these multi-layered depths. One of the accomplishments of Guzik’s sound in this case is that it defies conventional musical notation as it spontaneously generates harmonic series that are impossible to capture. “Invisible magnetic forces” propel the work and create these sounds.

Invisible forces seem to have preoccupied Guzik for 25 years; this Mexican-born creator and polymath has worked at the Nature Expression and Resonance Research Laboratory in Mexico all that time, where he concerns himself with “the phenomena of resonance, mechanics, electricity, and magnetism”, all of which can be harnessed to make music. Unlike conventional scientific research, which sometimes might appear intent on explaining everything away, it is Guzik’s mission to preserve the mysteries of creation, and imagination and fantasy play a large part in his work also. Press notes supplied here by Karla Jasso and Carlos Casas speak freely of time-travel and dreaming when they encounter this strange music; Casas, at least, has been fortunate enough to visit the installation in situ, and returned with a fanciful tale about the dream of Marconi along the lines of “sound never dies…it emanates and resonates eternally”. Casas is convinced we can gain insights into the past, present and future through contemplation of the Cordiox. The label owners are persuaded that this LP is “the most hermetic and fabulous” release in their catalogue. From 27th October 2016.