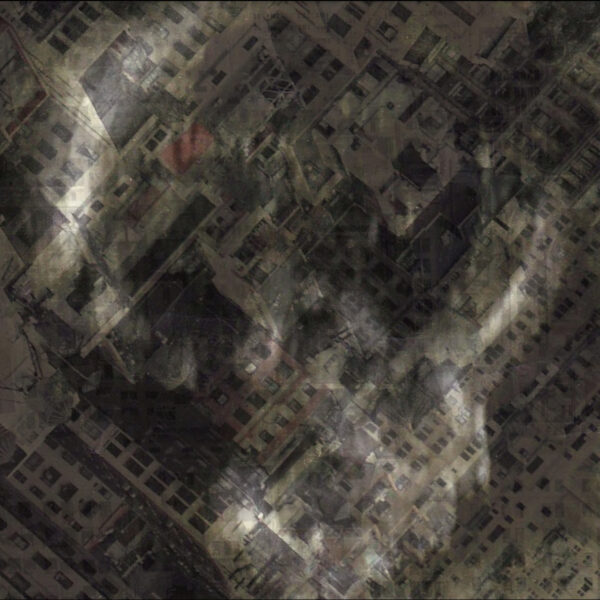 Repetitions Of The Old City – I (NO LABEL) is the fifth album from Jack O’ The Clock, the unique American band led by Daimon Waitkus. We previously heard All My Friends followed by Night Loops, both of which prompted rapturous prose from this listener and a tendency to liken Waitkus to many American mavericks in the fields of pop music, poetry, and classical composition. Based on today’s spin I see no need to rescind any previous observations.

Other hallmarks of excellence stand out in this selection of nine highly unusual songs. There’s the contributions of the other players, especially the violin and viola of Emily Packard, and the woodwinds of Kate McLoughlin, which do much to add to the exotic old-time flavour of these highly contrived rustic gems (Waitkus assembles his songs as if following a blueprint for making Shaker furniture). Packard’s violin has no trouble following the impossible time signatures of these elaborate compositions; her instrument simply dances, floats in the sky. Waitkus’s songs are ingenious with their unexpected chord sequences and clashing tonalities, and the very inventive melodies whose intervals shouldn’t really work at all, yet they work perfectly. To say nothing of the abstruse and erudite lyrics, with their multi-syllabic thoughts packed into singable melodies. I also see Waitkus is quite the octopus when it comes to playing several instruments – guitar, mandolin, hammer dulcimer, pianet, guzheng and flute are all in his credit roster, making him a match for Alan Sondheim (who made Ritual-All-7-70 for ESP-Disk in 1967). I think Waitkus and Sondheim should get into a gun-fighting showdown someday over instrumental prowess, but Waitkus would probably win on points with his song-writing gifts.

The other observation that occurs to me today is that Jack O’ The Clock (although they are as American as 100 Apple Pies) are not that far apart from classic English prog rock of the 1970s which I love so much, especially Peter Gabriel’s Genesis, a band whose eccentricity, mannered vocals and skilful arrangements feel very much of apiece with the music of Damon Waitkus. The acoustic guitars are reminiscent of Mike Rutherford and his 12-string, and there are even flute solos, like on ‘Firth Of Fifth’…I rest my case. High recommendation for this peculiar strain of art rock. As far as I know Jack O’ The Clock are still not signed to a label and do self-releases of everything. This one is so wilfully obscure they don’t even put their name on the front or back cover. From 11 November 2016.