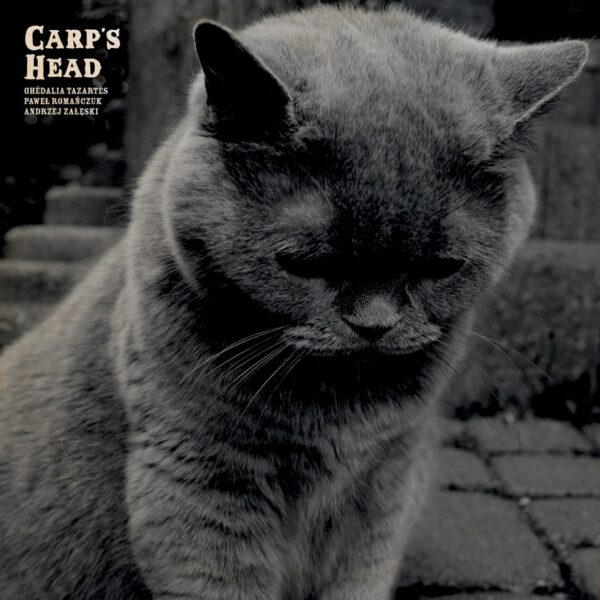 The Carp’s Head (MONOTYPE RECORDS MONOLP018) record is an extremely unusual album featuring the vocal talents of Ghédalia Tazartès, the unclassifiable mystic from France who has been coming our way a fair number of times in recent years…his tape collages, like the LP Repas Froid, are one thing – nightmarish reconstructions of the physical world and all that’s in it – but when he opens his mouth, strange creatures emerge by the bushel. We’ve heard him singing on Superdisque (with Jac Berrocal and David Fenech) and as one half of Reines D’Angleterre, and it’s not an experience that you can soon forget.

On Carp’s Head, he does a lot of guttural throat-singing type stuff that I assume is extremely hard to do, and makes Ghédalia Tazartès sound like some shaman taking off on a magical flight, or an old man of the mountains uttering prophesies. But he also makes sound effects and animal interpretations, such as on the self-explanatory ‘Wolves And Birds’, where he not only provides the voices of these ravenous beasts but also supplies the background sound of wind on the Russian steppes, and thus single-handedly creates his own atmospheric soundtrack for a radio play that has no story.

He’s doing it with the help of two Polish musicians, most notably the multi-instrumentalist Pawe? Roma?czuk, who seems to have access to many exotic-sounding devices that conjure up the spirits of non-specific ethnic recordings from everywhere in the civilised world (and beyond). Roma?czuk is not known to me, but he regularly performs in the experimental combo Ma?e Instrumenty of which he is a founder member. Roma?czuk has also built his own home-made musical instruments, and maybe some of them appear on this record. The other Polish musician is Andrzej Za?eski, who I think is mostly supplying percussive devices, a music curator who is known for his numerous musical collaborations, his cinema work, and performances in theatre groups.

Carp’s Head has a lot to recommend it – the all-acoustic arrangements, the spare simplicity of the playing, the unsettling atmospheres it creates, and the all-time freakiness of Tazartès’ vocalising throughout. The players have worked hard to create something innovative and new, proud of the way they “drifted away from the traditions of chamber music”. From 21 November 2017.