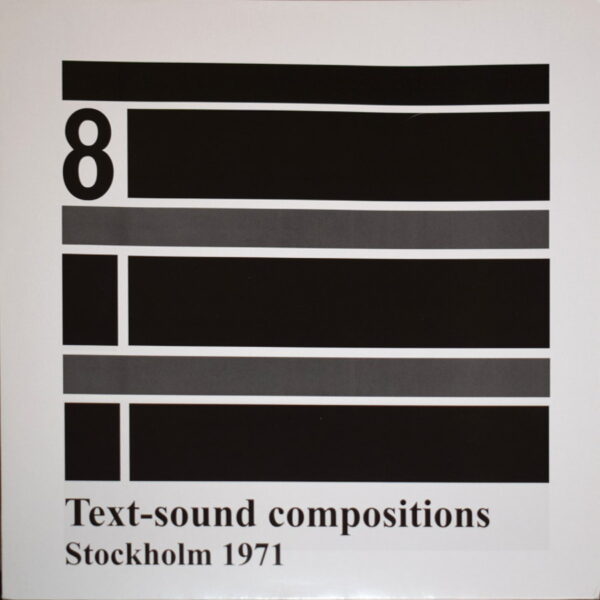 From 17 November 2016, we received these four volumes of a vinyl LP series called Text-Sound Compositions kindly sent to us by Daniel Rozenhall, current incumbent and custodian at the Fylkingen Records HQ. On them we can hear some fascinating examples of sound art dating from 1971 to 1974, works which were originally presented at the annual festival of Text-Sound Composition held at Stockholm. Right away I wondered why the series starts at Number 8. It seems the label are continuing a series of seven LPs originally released in the late 1960s and early 1970s, which ran out of steam at #7 for “economic reasons”. These new LPs continue the series, and coincide with a happy discovery of the original materials. The project must have been a labour of love for Rozenhall, who compiled and produced the set, did the mastering for the vinyl, did the research and wrote the annotations. There’s a generous amount of unreleased material seeing exposure for the very first time on these sides.

Given the creators involved on these records, and the nature of the work which often focuses on the human voice, one is tempted to characterise the material as “sound poetry”…but even that is quite a nebulous term. I recall listening to the Revue OU boxed set which reissued most of Henri Chopin’s audio magazine and which naturally tended to favour the French school of this most marginal of 20th century art forms, showcasing important works by Bernard Heidsieck, François Dufrêne, Raoul Hausmann and Chopin himself. However, it’s always been an international movement, and the American, English, and Swedish wings were represented in the box too. When writing about it, I struggled as I tried to edge towards a definition of what “sound poetry” might be, and to this day it remains elusive. To me the “purest” form would be the human voice dramatically transformed through use of tape and amplification, but based on what I hear on these four Text-Sound Compositions LPs, the activity could legitimately include electro-acoustic composition, performance art, free improvisation, radio plays, electronic music, noise, and more. Swedish Radio and EMS Stockholm had a big part to contribute. But it’s not all Swedish; these four LPs are also very inclusive in terms of nationalities, as we shall see.

On Volume 8 (1971) (FYLP 1039), poet and composer Bengt Emil Johnson kicks off your day of strange listening with ‘Under the rejoicing of the audience’. Crowd noises are fed through filters, including what sounds like the phase effect, and edited into perplexing snippets. Odd and slightly unsettling. Johnson regards these emotional expressions of the crowd as a “collective language”, which he might be trying to decode as he studies and works with the grain of what finds on his tapes. Tape manipulation has rarely sounded so subtle and understated.

Gust Gils turns in ‘Making Out in Windy Stockholm’. I never heard anything by this Belgian-Dutch poet, and on this evidence he seems to have been a pretty far-out loon. He drew inspiration from experimental literature, science fiction, and surrealism. Some or all of these influences might show up in this weird clutch of symbolist free-form poems, which amount to a sprawling, free-form narrative of some sort. On the surface, he’s rewriting classical history and legends on his own terms – there are snippets of the Prometheus myth, glimpses of Christians fed to lions, a political prisoner being tortured. If there’s a linking theme, it might be something to do oppression of minorities by the authorities. Gils had a spare style, not overdoing the use of tape loops, overlapping voices and electronic processing. The only off-putting aspect is the slightly smug “hippy” tone to his reciting voice; he’s not working very hard to convince us of his thesis, and kind of assumes we’re already on his side.

Herman Damen made four minutes of ‘Magic’ – in some ways sound poetry in purest form, if you agree with my generalisation above. Language pared down to the basics; just syllables, breath, coughing, snorting, and mouth sounds, bordering on absurdist Dada grunts. Real nice work. It was improvised, but improvised onto multi-track tape, and Damen worked to a careful structure with a deliberately limited range of syllables available to him. This Dutch visual artist has a rich history of unusual ideas, including intriguing areas like “kinetic language”, semiotic theatre, the use of a three-dimensional alphabet…all in the name of expanding our idea of what language might be, pushing the envelope in wild ways. Both he and Gils are described by Rozenhall as creating “verbosonies”, which is a wonderful word.

The last quarter of Volume Eight is given over to the great Bob Cobbing, a man who it’s fair to say was the first name in English sound-poets, and was also a pivotal figure in avant-garde 1960s London in terms of publications, happenings, performances, and poetry readings. In my fantasy life, I often dream of travelling back in time and visiting Better Books, a hub for the UK underground in London. Cobbing was also represented on Revue OU; Trunk Records collectors who purchased the Jeff Keen Noise Art LP in 2012 may be interested in Cobbing’s contributions to Keen’s Marvo Movies. Here, on ‘Trilogy Three’, Cobbing was joined by John Darling to produce the most near-musical piece on the LP. Eerie overlaid and simultaneous voices using much primitive tape echo, creating a sort of monstrous chorus. No words, just mouth sounds and wailing, amounting to an almost song-like effect, both dreamy and grotesque.