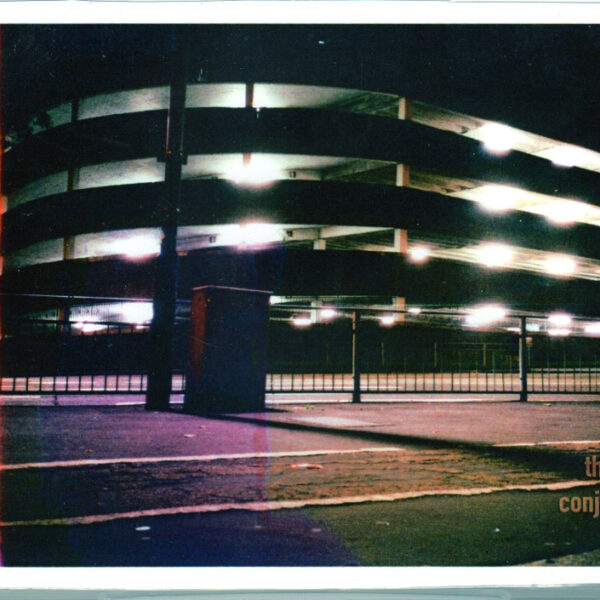 The Conjugal (NO LABEL) is the latest in a series of sporadic outputs from Inecto School, a combo whose music we have been enjoying since 2004. For a long time I loved their air of mystery. I think they’re based in Leeds, and pretty much all we know is the Christian names of the five male players – Lee, Mike, Will, Stewart and Andrew. At any rate, their strenuous efforts to retain anonymity are loosening up slightly with this release, which includes photographs of the five guys. Admittedly, pretty low-key images – the BW photos are obscured by colour overlays, as they pose in “arty” composed shots. Only two of them are even shown playing instruments. I’m ambivalent as to whether I want to see pictures of my faceless heroes; it does rub some of the sheen off their mystique. On the other hand, now at least I know that cello, guitar, and bell feature in their instrumentation.

According to Stewart’s enclosed letter, the group reconvened in 2015 – suggesting that they may have been on temporary hiatus since the last time we heard from them, with 2011’s Free Time CDR. The eight tracks on The Conjugal were recorded during two musical meetings; the finished product is “edited together from live recordings” and the band regard it as simply “a record of what happened on those occasions when the group played together.” Inecto School have always carried this lack of ambition as one of their badges of pride, and their expectations (in terms e.g. of record sales, audience satisfaction, profile-raising) have never been especially high. At a time when everyone clamours for instant fame simply by posting their snapshots on Instagram, there’s a lot to be said for this low profile stance.

I find myself somewhat underwhelmed by the music on this occasion, though. It’s very relaxed, almost lacking in tension and spirit; and there doesn’t seem to be much urgency in the playing. As a result much of the content comes across as rather insubstantial, and increasingly less rewarding with each listen. On the other hand, many of the elements I have enjoyed in the past are still intact: all the music is acoustic; it’s played very quietly, without being so minimal as to be completely inaudible; there’s an interest in melody, repetition, and patterns, things which many improvisers do their utmost to avoid; and they still sustain this faintly nebulous quality to each performance, where the music is so fragile that none of the five members are inclined to even touch it, let alone interfere with its progress. Again, this restraint is something that more famous improvisers, with their extended techniques and aggressive strategies for advancing each performance, might want to take note of. What may at first have struck me as “insubstantial” may be a core component of an Inecto School performance. All of these good qualities are also well served by the lo-fi recording quality, remarkable as it may seem. Not even the recording microphone wishes to intrude too invasively on the music’s progress, and is content to remain as an observer in the back row.

While I realise this equivocal review might not be selling you on the idea of Inecto School, I think you should investigate and cherish their music as a rare example of something gentle, strange, and private, in a world where everything appears to be on the surface, online, and made available to millions of uncaring listeners at the touch of a button. If nothing else, it’s clear these five care about what they’re doing. Issued in a slimline DVD cover and evidently limited to 20 numbered copies. From 20th March 2017.