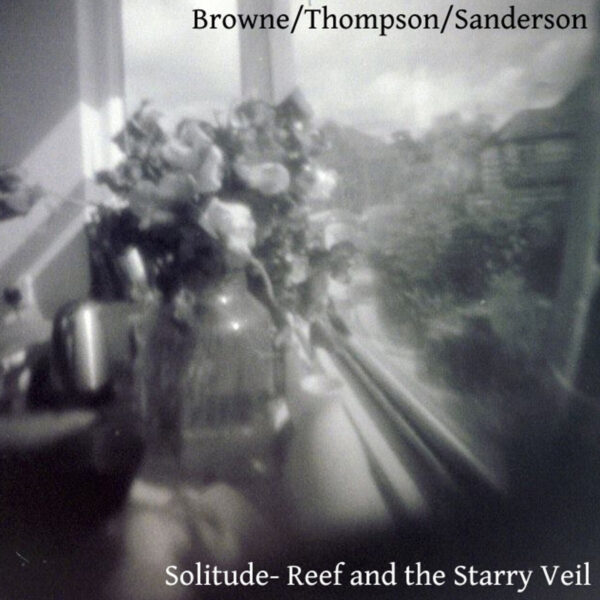 For the second time in a number of years, dog-walkers and joggers living nearby have had their sense of reality scrambled by strange, abstract sounds emanating from a seemingly innocuous-looking girl guides’ hut deep in the Aylesbury, Bucks quadrant. Now unmasked, those responsible for those puzzling twangs, squeaks and clangs reveal themselves to be locally-based Mark Browne on tenor sax/percussives, acoustic guitarist Daniel Thompson (a one-time pupil of John Russell) and melodeonist Richard Sanderson, Linear label boss and vital cog in the workings of The Lost Robots, Minnow and Ticklish. The B.T.S. trio’s The 1926 Floor Polish Variations debut (on Linear) marked their first ever meeting, but with Solitude…, the three piece, now gig-hardened and still working relentlessly towards the almost grail-like ‘improv sew-on badge’ have widened their horizons with the introduction of ‘collected objects’ and ‘small instruments’.

Naturally there are shadows cast by the recognizable instrumentation of strings, reeds and keys, but it’s those anonymous junk store finds that really stamp their little feet on the proceedings, with what seems to be ‘dinner-is-served’ gongs, teddy bear growlers (?), and big slurpy kisses, created perhaps by polystyrene rubbed on wet glass? Come to think of it, all very reminiscent of The Familiar Ugly’s work on Red Crayola’s Parable… l.p.. And…I swear that I can detect the sinister profile of Mr. Punch making an appearance on “Freighted with the Dreams of Time”. Ever since childhood beach holidays, I always found the antics of Punchinello and his dysfunctional family a distinct turn-off… sausage-eating crocodiles included. Now he’s come back to haunt me! Anyway I digress. it would’ve been useful to have seen a few photographs of these noisesome knick-knacks in the raw, but that’s a small grouse when faced with a trio comfortably basking in the tradition of Anima/Limpe Fuchs, the L.M.C. and Morphogenesis, while still having their very own distinctive voice.

And as for an explanation for the somewhat obscure nature of the c.d. title, Richard S. of Linear, tells me that it’s a line extracted from “A Toast” written by French nineteenth-century poet Stéphane Mallarmé. So there you (and I) go!