Part four of our survey of recent releases from Fou Records. Last item of these six CDs is a fine sax and drum record called La Nuit Circonflexe (FR – CD25). Once again Jean-Luc Petit picks up his sopranino and alto saxes and his mighty droning contrabass clarinet, to play alongside Benoît Kilian the percussionist who may or may not play a semi-conventional drum kit as well as his “grosse caisse horizontale”, an unorthodox credit listing which hopefully refers to his use of an empty packing case or trunk as a drum. On these 2016 recordings, what mostly emerges is a series of powerful woodwind drones and blasts, much in the foghorn mode, the mood interrupted by the debris of wood and metal scrapes from the percussion side, which have the effect of shredding everything in sight. It’s an album that’s like a day in the cosmic sawmill, where all your prized possessions are being cut to pieces by industrial buzz-saws in slow motion. The workers carrying out this destructive task are impassive and immune to our pleas when we ask them to stop. The strongest manifestation of the duo’s approach is on the 11-minute opening cut, ‘Gazouillis Fragile D’Inconsolés Soleils’ which heaves with all the apocalyptic power of a groaning giant revenge-tree from the Jurassic era, stretching its ancient branches and fronds to do battle with a dinosaur, although ‘Allivions Des Graves’ is a mesmerising episode and the illogical hoots and insistent feedback of the title track are also enjoyable, to say nothing of the busy percussive maniacal effects which Kilian is phoning in from the Portakabin next door. Much to enjoy on the raw edges and impolite sound of this record, and it’s good to hear the two guys throwing themselves into their work with a lot of passion and exploratory spirit. 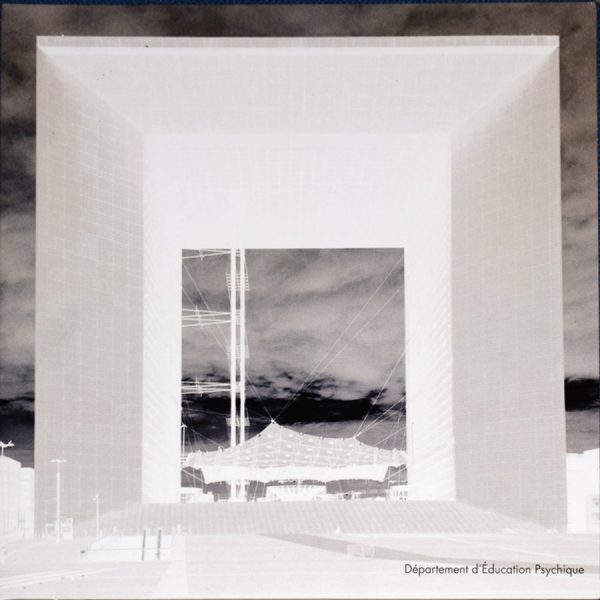 Bonus FOU Records material in the shape of the double LP credited to Département D’Éducation Psychique (FR LP 03&04). I had to re-read that one myself – it’s “psychic” education, not “physical” education. The world has lost touch with its own psyche, its spirit; we need to be re-educated to understand ourselves better. I like the idea that there could be a civil service department devoted to this task, but the first requisite step would be a government that values its citizens and recognises that we have spiritual needs as well as material ones. In this instance there is no department, just Jean-Marc Foussat teaming up with Dynamo Dreesen and SVN, and their live performances at Ohm and Neues Deutschland in Berlin in 2016 have been recorded over four sides of vinyl. Dynamo Dreesen is Andreas Krumm, an up-and-coming techno-House producer who runs Acido Records, and has released one or two split 12-inchers with SVN, i.e. Sven Rieger. They supply live electronics, Jean-Marc has his trusty AKS and his singing voice. The Ohm Concert occupies three sides…it starts out pretty flabby, with a nondescript generic electronic drone that’s nice enough, but unchallenging. By side two the drum machine has been turned on, and though it’s playing a really wimpy bossa-nova pre-set, somehow this kicks everyone into gear. The air suddenly thickens with layers of everyone making noise; not exactly out of control or wildening to the listener, but perched just on the right side of chaos. Further experiments follow, mostly of the one-thing-on-top-of-another variety, which I assume is standard practice in this context (do DJs still sample recordings of church bells? Apparently they do); this may not vary from any average set of avant-DJ-ing, but somehow JMF slots himself right into the milieu with ease. The fourth side, titled ‘Mais On Y Songe / Aber Man Darüber Nachdenkt’, kicks off with a mysterious brooding quality which is intriguing, and soon bubbles up into the usual morass of squelch and anomalous samples (including barking dogs, for some reason). Maybe not especially innovative, but I think I can see how JMF hooked up with this pair. Like him, they’re maximalists; they don’t belong with the clean and clinical schools of Cologne or Vienna, and favour dirty sounds and untidy execution.