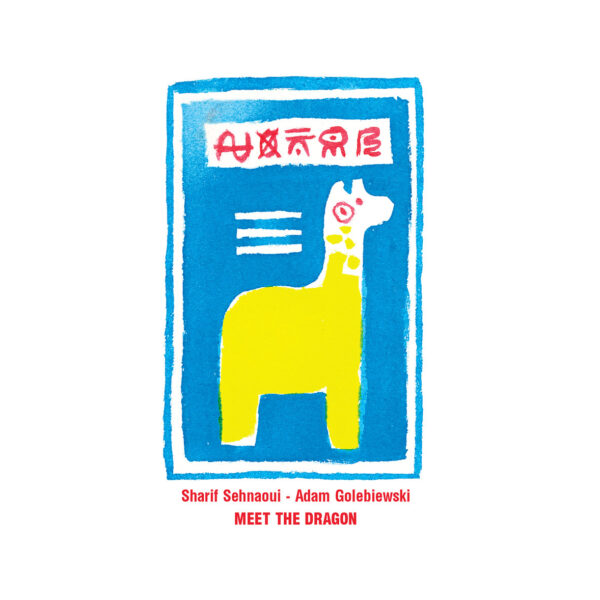 Meet The Dragon (UZNAM.1) is the social proposition put forth by the duo of Sharif Sehnaoui and Adam Go??biewski, who recorded this in Poznan in 2015 and now issue it as the first number on the Uznam label. Forty minutes of all acoustic improvising scrape and ding and bang and spastic strumming await you on this fine disc, produced entirely from the acoustic guitar of Sehnaoui and the eclectic metallic-sounding set up of percussionist Go??biewski. We’ve heard the metal-bashing Pole before on his solo album Pool North, which did more to recruit dentists in Poland than any given two-year enlistment programme, because it demonstrated in basic audio terms what it’s really like to wield those extraction forceps on a back molar. He impressed us v. much with his omnivorous musical appetites, his rugged untutored style.

Sehnaoui is from Beirut and moved back there recently after hob-nobbing around Paris with his guitaring ways, and is a “wow” on the international festival circuit, building up over the years a long list of fellow gladiators who will “go it” with him in the improvising arena. One of these is Alan Bishop; I bet the carpet fibres were totally mulched after that particular encounter. Well, Meet The Dragon does eventually settle down in the middle into a tinkling ring-a-ding escapade where’s it’s hard to differentiate the ringing strings from the xylophone-like percussive belts, but even through this quieter and calmer stretch I’m really digging the driven, obsessive characteristics of these two maniacs – they keep on carving away at those notes like a surgeon with a scalpel who isn’t happy until he’s pared away the bone to a splinter. One thing I’ve never really enjoyed, if I’m honest, is those quiet-reduced improvisers who think it’s somehow “impure” to keep on playing notes, which is sometimes the only way I can explain why they keep stopping and leaving those silences. These two worriers keep at it like a pair of industrial looms from the 18th century that are about to be declared unsafe by a health inspector.

Anyway, before this quiet segment there are several ecstatic moments of raw acoustic noise that pretty much saw the top of your chimney off – who knew that so much volume and power could emerge from a setup without amplifiers and FX pedals? Well, Dan Peck knows it, that’s for sure. During these moments, it’s evident to me that where Sharif Sehnaoui and Adam Go??biewski have a shared interest is in “the scrape”, that powerful gesture that releases all manner of unexpected noises from an instrument, be it an acoustic guitar or percussive objects (especially metal, oh yes, the cymbals), and is still curiously regarded as “non-musical” by some killjoys. It is through “the scrape” that we finally get to Meet The Dragon, and even if said dragon looks like a fun-loving yellow llama on the cover, you’ll still be glad you stuck around to exchange fangs and shake paws with that South American monster from Peru. From 18 July 2017.