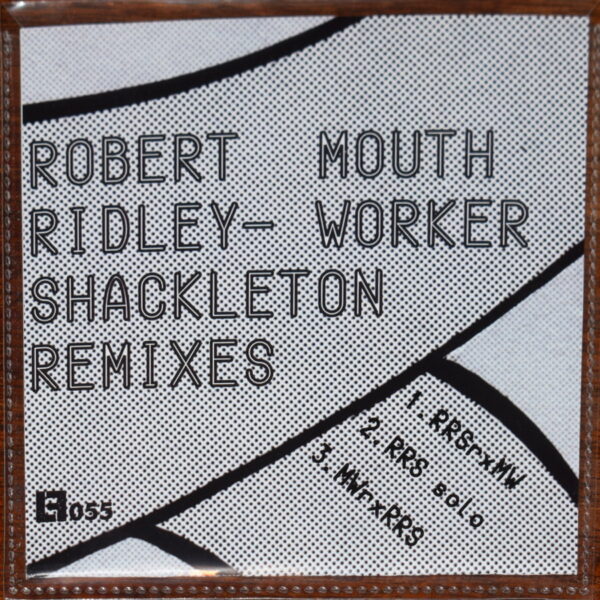 Remixes (LF RECORDS LF055) is sold to us as a “remixes” album, credited to both Robert Ridley-Shackleton and Mouth Worker. If we want to be more precise about it, the first track is Robert remixing Mouthworker, and on the last track the favour is reversed. In the middle is a solo cut by Ridley-Shackleton. We’ve heard from Robert Ridley-Shackleton about once in the past, with his Ovencleaner mini-CD for this label which was a fearsome abstract scraper to be sure, and reminds us that he’s also a visual artist and had his own micro-label (Hissing Frames) for a few years, mostly to showcase his own output. Looks like he stopped doing it in 2015 1. His work here on the first track strikes me as proceeding at a rather leisurely pace for some reason, much like a man dismantling your washing machine in slow motion. You see, I can’t help associating him with household objects or white goods. It’s the oven thing. Some 15 minutes of distorted, lo-fi non-music from the tiny junkyard ensues, making evident its dependence on contact mics or ordinary mics, which sometimes shriek a bit of feedback in complaint.

So far, clutter-dom reigns. You’ll pretty much get more of the same on the “solo” track which follows, which may prompt a reasonable question about where the “remixing” comes in and how it makes any difference. I am not objecting though. By now I’m really finding a lot to enjoy in the anonymity of this strange sound, by which I mean you can’t really connect it to a human being or anything a person might actually do in real life. At one point I find I’m treating the irregular pulses and patterns as some sort of basic Morse code; a message from a remote corner of England. There’s also more of his “vocal” interjections audible here. So much for the anonymity. He’s muttering in some private language. Jazz pianists, almost all of them, do it; they hum an off-key version of the melody they’re trying to play. Robert Ridley-Shackleton may find his mumbles and verbal tics help him to perform, somehow. I’m getting a picture of a charmingly eccentric fellow. I like him already.

Well, lastly comes the turn of Mouth Worker to wreak his skilful hacks and grabations. Right away the mood changes. The atmosphere is crowded and even slightly stormy, the field of play is more cluttered than before with debris and junky garbage, and those frequent electrical crackles are as menacing as cobras on the floor. Electric cobras, spitting sparks, aye. He also makes more extensive use of the human voice, but it’s totally distorted and just one more signal in this teeming array of broken information. We can’t help but take it as a metaphor for the turmoil of modern life, particularly as we experience it through the blizzard of social media. Listening to this jumble shows how hard it is nowadays to separate the false news and misinformation from the truth, leaving us helpless before torrents of processible data which will cause our poor brains to fry and short-circuit in no time. Mouth Worker has appeared on this label a few times in the past, for instance on Rose Of The Desert (noted here), though for some reason we missed getting a copy of his New Yekaterinburg album from 2015. This item at any rate is killer stuff, just the sort of thing which this label does best. For further evidence of the cut-up nature of it, see the back cover which mangles a comic strip featuring the cat from Tom and Jerry, alarmed by his own shadow or by noises in the night. Eeek. From 17 July 2017.