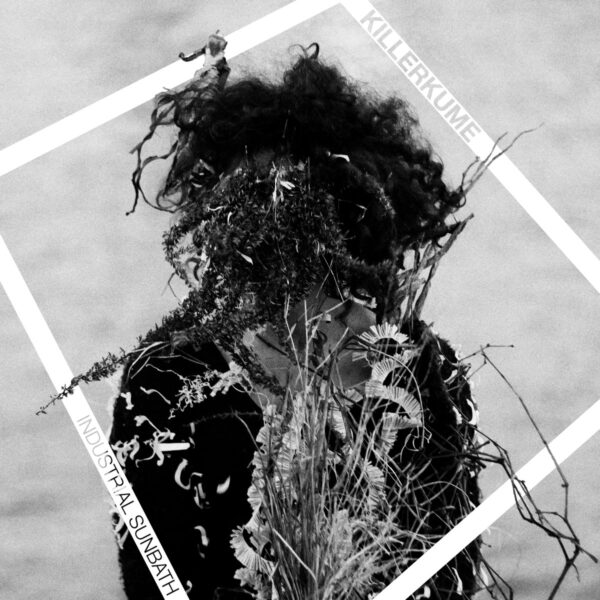 Thrilling blast of avant-rock guitar and drumming noise from Killerkume on their album Industrial Sunbath (GAFFER RECORDS / COSMIC TENTACLES / DDT BANAKETAK / POLITBURO RECORDING FIASCO). I often wonder what became of the guitar-and-drum genre which I loved so well, reflecting on the many happy hours I have spent spinning albums by Ascension, Lightning Bolt, Mouthus, and other prominent teen idols. Of course we have enjoyed the work of some recent French guitar psychopaths such as Sun Stabbed and La Morte Young, but they tend towards the turgid and the drone, for all their noisy posturing. To do this properly you need about 115 volts sent up your spine. These two lizard-men from Bilbao in the Basque Country, Joxean Rivas and Mikel Vega, have evidently undertaken this treatment. They have no time to waste with niceties and get straight down to the sweaty labour of hammering out their noisy, angst-spattered statements, replete with discordant harmonies and nasty non-combinant notes that fans of early Sonic Youth will savour. Plus there’s the sparing use of reverb and other groinkly effects on the guitar, which to my ears gives them that “futuristic rockabilly” vibe which is coveted by so many.

Killerkume are also good at staying the course, by which I mean that once they have chosen a death-dealing pathway that involves many chainsaws, boxes of dynamite and buckets of flaming acid, then they stick to it and see the job through to the end, without any pulling over to the side of the road for a pit-stop, to refresh the mood, or even draw breath. No pain, no gain, is the motto of these plucky Spaniard bastards. Consequently Industrial Sunbath is a truly monotonous and dismal listen, where the sheer greyness of the repeated and claustrophobic sound can depress and unsettle the listener, even while the upbeat tempos and hyper-active moves of the pair are pulling us in another direction. This is a good thing, by the way. There’s nothing worse than trying to make a “varied” album, especially if you’ve only got one mode of playing and only one thing to say. Far better to slug it out in the boxing ring of rock noise, an arena which incidentally has also started to include all-in wrestling as admissible to the fighting situation, a change which came about when it was wisely decided to dispense with the referees and jettison the Federation rulebook. Now it’s truly a matter of life and death and you’ll be lucky to come out with all five limbs intact.

The duo formed in 2012 and the players emerged from other obscure bands such as Loan, Ximel, Mirage, and Hauts. As Killerkume, they made another LP before this one, Trautzer Blaster in 2015…this one looks essential by the way. It passes two of my tests for essential listening in this genre – #1, it’s released jointly by seven labels and #2, there are many images of apes used as artworks. No matter what the music may be, for me a gorilla will always win out. The two guys also play in Orbain Unit, which has more “jazzy” influences (whatever that means), but you’ll stick with this puncher if you want a dose of honest rock noise slugged straight to the gut. Mind you, they claim to be experimenting with “free improvisation” on this LP, which may account for the few moments when they slow down and tread water while attempting to regain balance in the rocky rowboat. This happens on the track ‘Harrakapina’ where they start to sound a bit like The Doors warming up for a take. They’re also in the process of making a new record with Mattin, fellow Basque, who has been known to handle a pretty fierce guitar in Billy Bao. Did I mention this record was made in three days? That means they also passed test #3. Keep up the good work, Joxean and Mikel! From 13th February 2017.