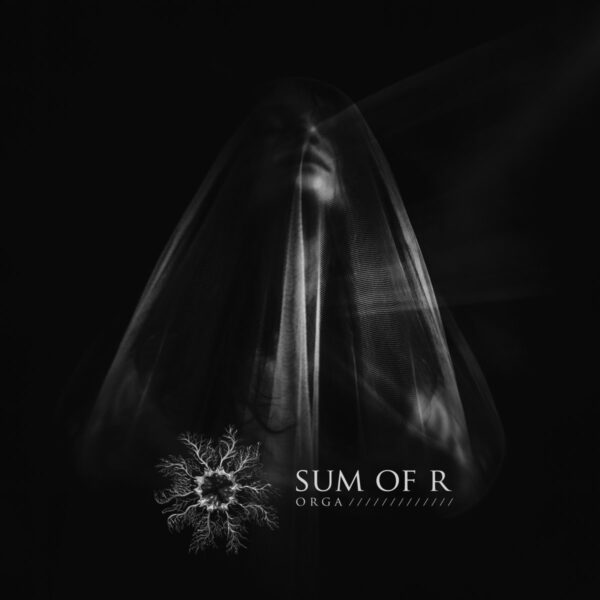 Sum Of R is the Swiss act featuring the multi-talented Reto Mäder, who does most of the performing and recording with his guitars, keyboards, tapes, effects and studio skills. We’ve been enjoying their music for many years now, I think ever since their debut album for Utech in the USA, and I often wonder why this lugubrious music has a continued appeal for me personally. It’s probably something to do with the dark and macabre themes which Sum Of R inhabit with a certain grisly relish (as does Reto’s solo project, RM74), which I continue to savour even as I find the uniformly slow pace of the music frustrating sometimes.

The new release Orga (CYCLIC LAW 97th CYCLE) continues these preoccupations in no uncertain terms, starting with the black cover, the mysterious photos of a veiled ghost, and the typesetting in full caps to convey the solemnity and majesty of these trancey states. The album also opens with a sample of a Houdini recording, or at any rate a medium or other acolyte attempting to summon the ghost of Houdini, and the old recorded voices drift into our bones through the awe-inspiring drones of doom. As noted, I always think of Sum Of R as a Reto Mäder solo thing, but this time there is collaboration from Fabio Costa, who plays many instruments and also authored one song; the French drummer Jason Van Gulick who is probably responsible for the portentous percussive beats that contribute to the sense that we’re all marching to our deaths in a hypnotised state; and voice additions from Rachel Buehlmann, who has worked on one album for Cavern of Anti-Matter. I feel certain that Sum Of R are not above using the power of suggestion to get us to complete their work, and the title “Orga” may be prompting us to think of “organism”, in order to associate it perhaps with ectoplasmic material (if indeed that is classed as an organism) or with microscopic entities, most likely virus-carrying enzymes and microbes playing their part in the destruction of the human race. See, I’m trying to get in the spirit of it. There are even some found prints of said organisms decorating the cover art, implying that we will become infected just by picking up the digipak (or double LP, if your budget stretches to that edition).

A tasty treat for lovers of doom and dark ambient genres, filtered through a decidedly European romantic sensibility; black velvet capes and leather boots are required garb for listening to it. From 25 September 2017.