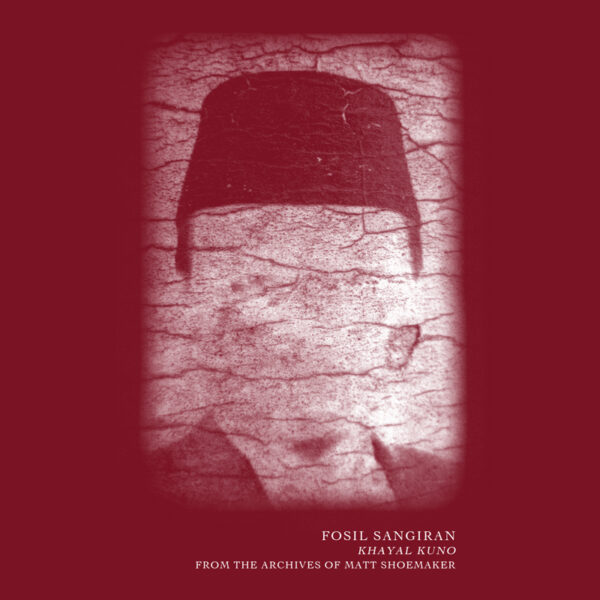 Fosil Sangiran was a project that experimental Seattle musician Matt Shoemaker (1974 – 2017) ran during his stay on the island of Java in the Indonesian archipelago from 2012 to 2013; the project’s name refers to an archaeological site in Indonesia that has UNESCO world heritage status due to its contributions to our understanding of early human evolution. “Khayal Kuno” is one of two compilations of music Shoemaker made under the Fosil Sangiran name, the other being “Pasar Fosil” which is also available from The Helen Scarsdale Agency.

Even on cassette tape – not always the best medium for immersive ambient drone noise soundscapes though the suggestion of tropical rot and decay perhaps can’t be replicated on other recording media – the sounds are incredibly beautiful yet sharp and focused, and the entire work is often intense and confronting. Strange figures, composed entirely of wobbly noise, seem to form and live their entire lives, moving about as if within a spinning cocoon, within the sonic universe created here. The music travels at an easy and steady pace that allows the listener to savour the strange moving textures and trotting beats. The work (on Side A, that is) gradually evolves from serene drone noise to more jerky squawking, as though to simulate a troop of quarrelling apes or birds travelling through a rainforest canopy. You may not be able to hear a second looping piece of slightly deranged melody in the background but it’s there all right.

The soundscapes on Side B emphasise a more beats-oriented approach with pulsing motor / industrial factory rhythms that can be very powerful and sometimes hard on the ear. Just when you think the repetition will send you bonkers, the rhythm seems to change and sharp spear drones zing and vibrate through the motorik rhythm structure. Again as the track progresses and develops, the humidity seeps through and shrouds the music in lush tropical decay. From here on we escape into a seemingly microscopic world of flitting sound and crackling mini-noise that leads into another motorik universe of tiny UFOs launching into space or settling on the ground.

The immersive experience you’ll have on this and the other Fosil Sangiran tape is really unlike any other soundscape experience you may have: here is completely enveloping music that is constantly mobile and busy yet easy-going enough that you can hear and experience nearly every sound, and the memory or impression associated with it. It may be pure instrumental drone or noise but every second of it is made to count. You will be too enthralled to notice that something like 20 or so years are passing by while the music has you in its grip.

Sadly Matt Shoemaker is no longer with us which means the music he made as Fosil Sangiran and under his own name remains his chief artistic legacy. The Helen Scarsdale Agency label has committed to releasing more of his music archives on tape and CD so that a wider audience can share in the astounding soundscapes he created.