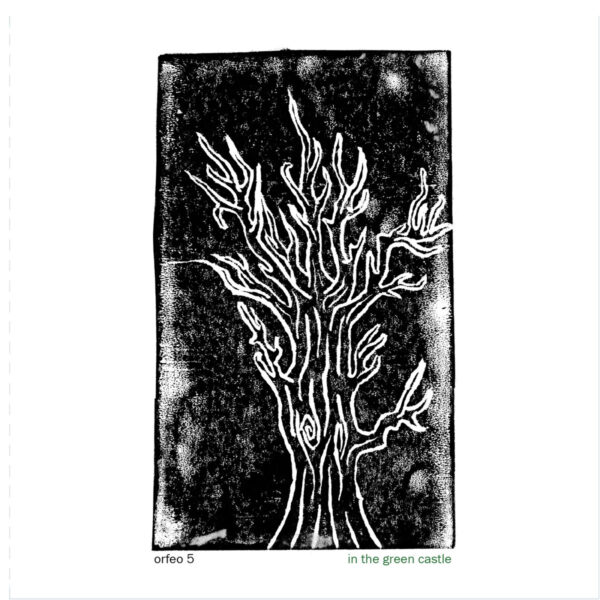 It must be as lonely as being a lighthouse keeper on a winter shift to be the sole flag-bearer for a sub-genre such as Orfeo 5‘s ‘Improvised Narrative Landscape Music’. However, it’s stood them in good stead over their sixteen-year career on the art centre and museum circuit, as both 2009’s A Year on the Ice and its follow-up When Bill Danced the War have completely sold out at source some time ago.

It all began for this trio of Shaun Blezard (electronics), Matthew Bourne (cello/keys) and saxist Keith Jafrate with a few lottery-funded tours of the U.K., where their text/music hybrids were constructed around the works of Dylan Thomas, W.S. Graham and a number of Yorkshire poets. With one very notable exception (more on that later…) …Green Castle eschews the verse and lectern in favour of a singularly engaging form of instrumental improv. The stunning opener, the evocatively-titled “Ghosts on the Landfill” starts as things mean to go on with the eerie flute trails of guest Simon Price seemingly emanating from an ancient, mist-shrouded churchyard instead of the confines of a modern digitized studio. The trio’s cited influences of Evan Parker, Alex Cline, Nils Petter Molvaer and Jon Hassell (what about John Surman’s Saltash Bells?) can all be found sprinkled in and around “And Miles Away I Saw”, “Transformed by Fire” and the Eno-like EMS synthi-driven atmospherics of “Fearful Beauty”, but that recurring edge of disquiet is never that far away, and that’s a feeling that those aforementioned worthies aren’t particularly known for.

So, just to play the devil’s advocate, I’d certainly suggest that wyrdfolk progsters like the Third Ear Band and the nightmarish Comus could be portrayed as grainy, dog-eared photographs of distant half-cousins standing on Chez Orfeo’s mantelpiece. In fact, even more so on the album’s highpoint (in terms of editing/mixing nous and vision…) the enchanting “A Prayer to the Sea”. The choral sections (culled from workshops at the Russell Cotes Art Gallery in Bournemouth) resemble a clash of crossed-wire messages from the afterlife and are hastily reinforced by the waif-like innocence and emotional fragility of guest vocalist Mary Oliver; a presence not unlike Lindsey Moore, who graced certain passages of Basil Kirchin’s recently released I Start Counting soundtrack.

Certainly an odd man out in the Discus discography. In amongst the cover’s linocuts of blasted oaks (?) and spilt ink lies a different and perhaps truer form of ‘Hauntology’. Excellent.