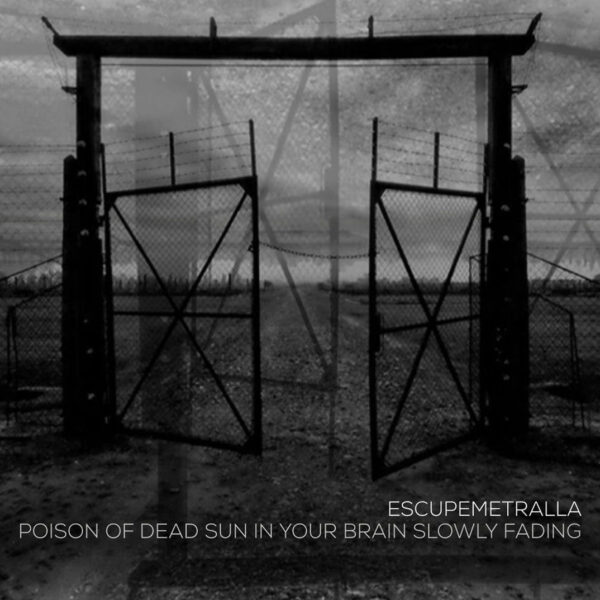 From Barcelona, we have Escupemetralla who may or may not be a duo of electronic experimenters, who keep a low profile and sometimes add to the confusion factor by claiming to be two guys named Muhammad and Muhammad. In this strategy alone, they emulate the anonymity of The Residents (who they claim as influences) and other obscure who-are-they combos in the droney-industrial stakes, such as Two Daughters or H.N.A.S.

Escupemetralla appear to have been active since the late 1980s, and their small but select catalogue of releases begins with the 1988 cassette Sublimado Corrosivo. Given the semi-revolutionary cover art for that release, and the fact that their name (which translates as spit-shrapnel) references a line from a 1930s anarchist song, I’ll go out on a limb and presume that these two Spaniards adopt a critical stance when discussing the political and social situation of the world today. Indeed today’s record, Poison Of Dead Sun In Your Brain Slowly Fading (NOVAK NVK043), incldues headers which explicitly divide the release into two parts, a ‘Transcendent Side’ and a ‘Political Side’ – the latter containing some titles which, while not exactly incendiary, are at least intended to be provocative. I do like the nightmarish spirit of the first half – ‘Hikuri Neirra’ and ‘Mutaciones De Nos Magnetofones’ in particular are fine examples of unwelcome ghosts shaking their gory locks at us. Here Escupemetralla prove themselves the equal of many of the bands/projects in their shopping list of influences, which include (inevitably) Nurse With Wound, Throbbing Gristle, Asmus Tietchens and many more of their ilk, renowned for creating music of great discomfort and psychological uncertainty. No wonder they apply the charming term “war ambient” to their music.

The political half of the disc, which includes a snarky “American Trilogy”, is more agitated in terms of beats, restless writhing groans, discordant chord mixes, and unpleasant noise; to this rich mix is added voice samples from the telly or radio. This suite – three tracks in about 18 minutes – doesn’t exactly succeed in landing many accurate blows on the body politic of the USA (if President Trump’s nuclear arms policy is indeed the target of these musical barbs), but it does convey a healthy sense of mistrust, scepticism, and outright paranoia. The album ends with an epic composition called ‘Gran Plan Para La Transformación De La Naturaleza’ which includes passages of over-crowded synth murk and symphonic prog moves that are, in places, overwhelming to listen to. One feels swept away by a tsunami of emotional tragedy that has somehow found a musical voice.

On the down side, Escupemetralla are somewhat prone to dwelling in long stretches of electric desolation; rather uneventful for the listener, however atmospheric, and more than one track succumbs to this mode. However, when they’re “on” these two anarcho-inspired Spaniards can be trusted to slit the throat of the enemy and make their getaway in short order, leaving a trail of consternation and confusion in their wake. From 20th December 2017.