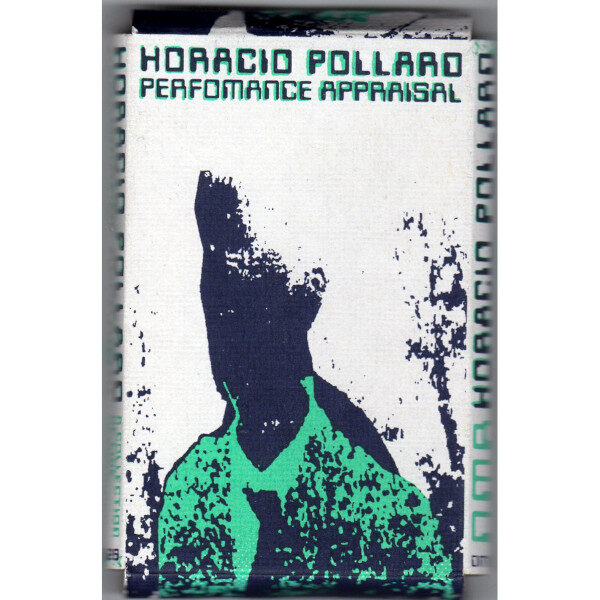 Got a live cassette by Horacio Pollard, our favourite madcap of uninhibited noise and loopy behaviour…from Drid Machine Records, the Norwegian label that always issues its cassettes in such nice tactile screenprinted folding wallets in extreme colours. It’s called Performance Appraisal (DRID MACHINE RECORDS DMR28), a phrase which strikes dread into the heart of any salaried worker in the civil service or any job situation where they have to submit to a ritual examination of their actions for the last year by their line manager. Hopefully, Horacio is the sort of free spirit who has never compromised his art or creativity by ever doing a day’s work for “the man”. If so, then this title may be taken as a rebuke to the wage-slaved squares as much as a simple play on words.

Generous amount of material squeezed on; each side contains five long tracks, including an uninterrupted 30-minute escapade on each side. Must be a trusty C60 that’s been hitting the tape-dupe machine back there in Stavanger. The performances were captured in many international locations – Norway, Germany, Japan, Lithuania, and the Czech Republic between 2016 and 2017. Musically, I found myself languishing in ennui with today’s spin for some reason; and yet Horacio is pretty much doing what he’s always done, making much use of drum machines, echo machines, loops, and distortion, along with bouts of crazed noise, vocal gibberish, and extremely unpleasant belches and eructations from the synth department.

Normally all of these things are a cause for rejoicing around these parts. The grungy quality of the recordings (maybe sourced from the audience) is a factor that may add to your enjoyment, or prevent you from savouring the full richness of Horacio’s lunatic on-stage antics. Yet for all his energetic cavorts, he can’t seem to take the music anyplace special, and he simply keeps thrashing around in the same paddock like a tethered stallion, pawing the ground with restless hooves. The limitations are especially noticeable on the long tracks, where I feel like I’m being punched into submission by a bar-band imitation of Suicide or Chrome. Still, when it comes to sheer abrasiveness and insistence in the music, there’s nobody I can think of that comes close to matching Pollard’s punk-spattered obnoxiousness, which ultimately is a very good thing. From 29th December 2017.