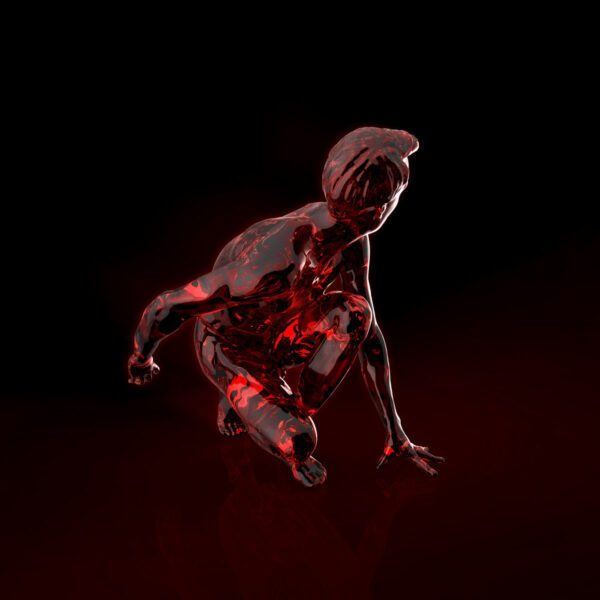 As its name suggests and the press release states more explicitly, Bad Stream is a solo project by German-based musician Martin Steer to unravel and make sense of his own feelings of distance, alienation, scepticism and I suppose ultimately fatalism about the dominance of cyber-technology in human society and culture, as human and silicon alike travel paths that may converge and result in beings at once human and non-human / silicon and non-silicon, and yet not really quite like one extreme or the other at the same time. All the songs on this album were written on both laptop and guitar, and were recorded in Berlin with a combination of real drums and programmed beats, guitars, piano, smartphone-based instrumentation and field recordings. And yet what results is an album that sounds very retro-1980s when synth-pop reigned throughout the world and names like Human League, Ultravox (with Midge Ure), Heaven 17, Blackbox and Technotronic were household names. Some songs like “Drown On Mars” even have a nostalgic “New Romance” sensibility and atmosphere with constant thumping pop beats, an industrial-lite soundtrack and vocals that are very obviously (perhaps too much so) angst-ridden.

For the most part, if you don’t mind the wheel being re-invented – and let’s face it, sometimes it does have to be re-invented by a new generation of people if they are to grapple with and resolve issues and problems of importance to them, if not to the rest of us – these songs are pleasant to listen to, with an even and steady pace, and very catchy tunes and rhythms. They are melancholy without being bleak or hopeless, though they don’t necessarily lead to expressions of optimism and can be repetitive. While songs are not long, they’re probably best tolerated individually: they can stand alone as singles material and hearing them all at once can be monotonous as the vocals, narrow in their range and emotion, dominate the music and the production feels rather heavy-handed. A light touch on some tracks or even between them in the form of short interludes of instrumental music or ambience would have been welcome.

I must admit I couldn’t really listen to most tracks for very long as they tend to go over and over the same ground established in their first couple of minutes. One of the more interesting songs is “#Angst” which features layered synths, a solo piano melody and guitars overlaid by Steer’s vocals. Some tracks like “Polyzero” and “Black Weed” are not bad at all but are ruined by a constant thumping programmed beat. Steer’s voice starts to become more overbearing and annoying than boring, and a small part of me is wishing that I should go back to checking out mediocre black metal albums made by people so embarrassed about their laryngeal potential that they insist on smothering their already distorted rasps in ten layers of reverb and ten of noise guitars.

This is a likeable recording but I fear it will grow stale very quickly and won’t sustain repeated hearings.