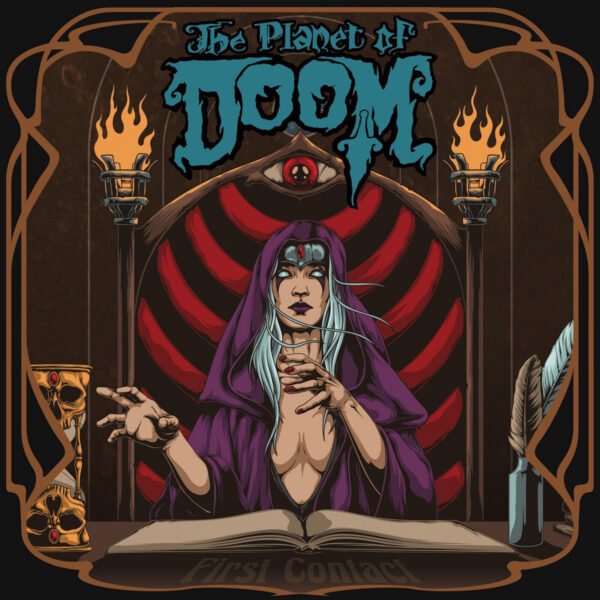 Ahead of the release of the animated film “The Planet of Doom” in 2019, and which I predict will blast Walt Disney’s “Frozen” out of the cinemas forever when parents and kids realise how superior it is in its animation, characterisation and plotting – well yeah, maybe in our dreams! – Ripple Music have seen fit to release a sampler EP of four songs from the soundtrack. All these songs range from psych stoner rock to sludge doom so I take that they’re representative of the music that dominates the soundtrack. First up is Mos Generator’s “Sword of the Sea”, a gritty psych stoner rocker with impassioned vocals that leaps from all-out attack to gentle ambient dream pop. It seems a very short song and I have a feeling maybe only an excerpt has been featured here. But don’t take my word as gospel.

Next up is Italian band Messa’s “Serpent Libido”, a much doomier yet still melodic proposition with an epic, almost apocalyptic guitar sound that inspires awe. On paper, the use of pure female vocals would be considered blasphemous but here they take on a witchy feel against a background of Sabbath-style doom metal. These musicians can also play quiet mood music so well that the sound of a pin dropping onto carpet would kill your eardrums outright.

Step up Vokonis from Sweden, a swamp-like stoner doom band with hardcore vocals performing “Runa” – this song is much looser than Messa’s contribution though the singing sounds tight and tortured enough. The gritty, crusty sound oozes from the loudspeakers and the music doesn’t so much flow as pour all over the ground leaving acid corrosion in its wake. Of course when the guys want to play fast and tight, they’ll do that very suddenly, and you’ll fall right over in stunned amazement when they do.

The band I most want to hear, Slomatics from Northern Ireland, does not disappoint with “Jagaer”, ultra-dooomy and sludge-hammer in heaviness … I simply have to prostrate myself and bow repeatedly before these guys, they deliver sheer sonic super slug-doom so heavy, my brain threatens to disappear through the floor with all that music flooding it ten times over. The singing is thin and high-pitched, and maybe they should consider hiring a guest swamp-monster vocalist whose throat can complement the music better but then I guess Slomatics just wouldn’t be the band I love so much. Here is one band of musicians who should be giving up their corporate day jobs to devote more of their time to playing even more slug metal!

Ripple Music did well to order the songs from the lightest and most melodic to the heaviest, most doomy and riff-dominant. All the bands here are very different from one another yet each is a good example (even classic, perhaps) of its particular genre or sub-genre of doom metal or stoner rock. Of the four acts here, I prefer Slomatics and Vokonis but the other acts have their appeal. I only wish all these songs had been longer as the bands’ styles seem very cramped in short songs though Vokonis’ “Runa” does sound complete here and probably does not need to go beyond its 5+ minutes.

Already my hopes are rising for the rest of the soundtrack and the movie when that comes out next year, on the strength of this sampler. Anyone curious to know more about the movie before its release can visit The Planet of Doom website.