Last two from the batch of Mikroton Label releases, which we received 13 March 2018.

Ahh, here’s the new album by The Elks. We like The Elks around these parts – mainly based on their lovely Bat English cassette which we got in May 2017. That was a document of two live sets by this foursome, namely Kai Fagaschinski, Liz Allbee, Billy Roisz and Marta Zapparoli. Today’s release This Is Not The Ant (MIKROTON CD 59) was recorded at Ausland in Berlin (where the team currently are based), a space that’s as much a performance venue as an art gallery and the culture is piled as high as boxes of peaches in a supermarket. The press release on this instance stresses the foursome as individuals – all with their own backgrounds and histories, and their particular approaches to sound generation / performance, whether that’s the tape manipulation antics of Zapparoli or the video feedback of Billy Roisz, though on this occasion she is credited with electronics and the electric bass. Playing tug-of-fish with the electronic half of the act we have the trumpet of Liz Allbee and the deadly clarinet of Fagaschinski. While Bat English was zany and eccentric, if not outright hilarious at times, This Is Not The Ant concentrates more on exploring the unusual situations it creates, and every avenue must be traversed up until the very end with vacuums and magnifying glasses – they take a forensic approach – before the quartet can go home for tea and buns. ‘Noise For Slugs’ is one example of the single-minded deep-dive into lower-register drones, hisses and murmurs that won’t let us rest for 15 minutes as it creeps towards its unfathomable and uncertain ending. Zero variations allowed here as the four enter some sort of unholy group-think mindset that has them thinking and moving as a single body. ‘Scuba Diving Elephants’ has more of a “zany” title, and is also characterised by characterful and expressive playing, particularly from Allbee’s muted trumpet which squawks like a duck, while other players are charged with creating the aural equivalent of a deep tub of mud in which a large body can writhe freely. This kind of thing is why The Elks may matter more that you think, because they genuinely seem to play whatever they want to play and don’t care much about conforming to genres, labels, profiles, or other restrictive pigeon-holes devised by experts. To put it another way, they make improvisation look like fun again. For further proof, see the cover collage which is by Liz. Make mine ant! 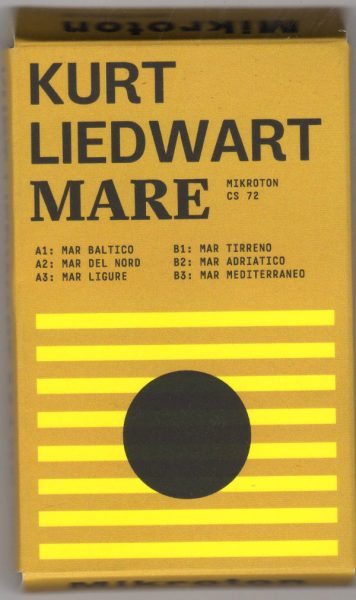 Lastly we have Kurt Liedwart again with a cassette called Mare (MIKROTON CS 72). This is of course the Italian word for seas, which Kurt seizes as an apt metaphor to express his own creative dilemma. He makes too much music, he is too productive, and at times feels he might be awash in it, drowning in it, or even swept away by the waves of that sea of abundance. “I felt my older sounds still pursue me,” is his lament, “and the only way to get rid of them is only through publication, or otherwise I could’ve drowned in the seas, or mari in Italian, of old sounds.” As you can see, the solution he finds is to publish work, release it; in this way, he himself is released from the burden of its curation (or even the burden of simply keeping the sound files on his computer). I think the source materials on Mare come from 2015-2017, but it seems he used earlier (improvised) pieces as the basis for their construction as compositions. Mostly if not exclusively electronic music is what you get. Quite nice, but mostly just minimal patterns and textures; a lot of it feels like a sketchbook of unfinished work, and in many cases the intention or direction of the music is not clear.