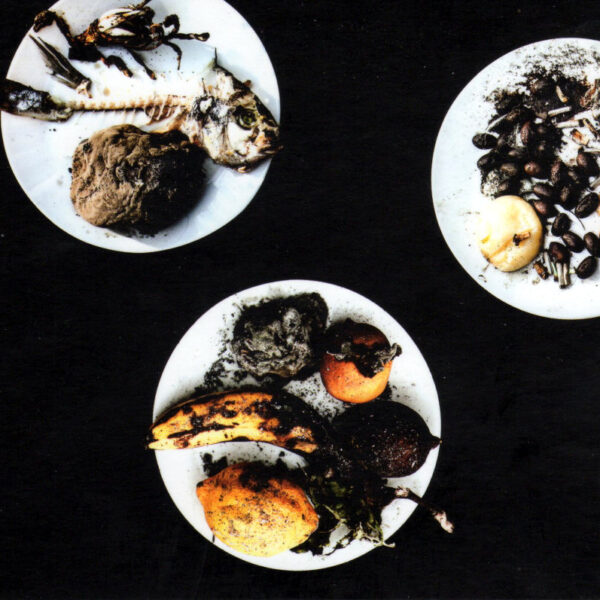 From Nicola Quiriconi in Italy comes another shining example of European supernatural terror-drone at its finest. Daimon made a dent in the ectoplasm with their self-titled debut for Metzger Therapie in 2017, and now make another cross-over into the “other side” with Dust (SILENTES MINIMAL EDITIONS sme1866 / ST.AN.DA 1803), a spookster item packaged with cover images of unsettling last meals, plates full of burnt offerings and unfinished fare (one plate appears to offer a roast scorpion).

The trio of Quiriconi, Paolo Monti and Simon Balestrazzi continue their spiritualist experiments and forbidden seances, with tracks such as ‘All The Dead Dreamers’ and ‘So High So Close’, using conventional instrumentation along with treated voices, electronics, microphones and amplification, to convey their unsettling speculations. The seagull samples on ‘So High So Close’ are a nice touch, contrasting with the vibraphone playing of Simon B. to create an alternative, more morbid soundtrack to The Birds. To put it more plainly, he taps those vibes like a dead jazzman risen from the grave, so chilling and slow is his delivery. ‘Leonard’ is somewhat more conventional grim drone fodder, but I like the way it occupies some crossroads between Industrial music and kosmische outer-galaxy flights, tinged throughout with a poignant emotional mood that is neither melancholy nor dread.

‘Awash’ is likewise full of a pained longing that’s hard to pin down, and the spectral tones are as beautiful as they are troubling. Strain to hear what the spoken word element is delivering to us in terms of a message, but you just know it’s not good news. This reminded me how I couldn’t get enough of the “voices of the dead” effects which they used so well on their first record, but this still wins eight out of a possible ten undertaker’s coffins. In terms of moribund preoccupations, instrumentation and studio skills, we just gotta put them in a bracket with Reto Mader and RM74. From 25 April 2018.