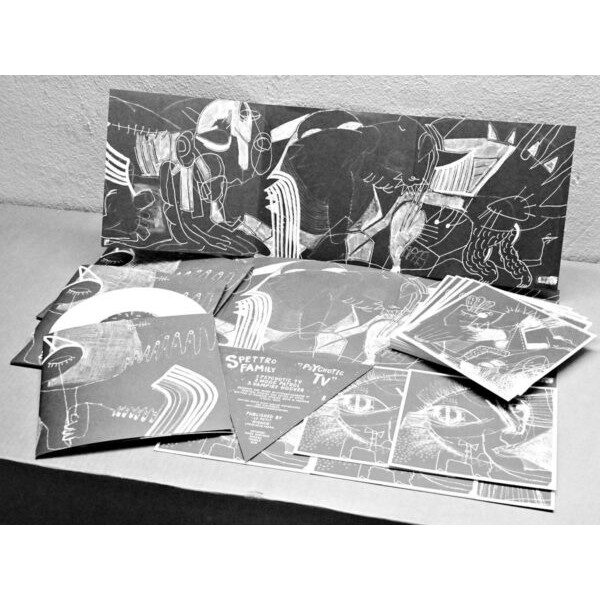 Here’s the latest Le Petit Mignon single (via Staalplaat), of which it’s been a long time between…I mean we haven’t received one since 2016 when we heard the 16th one in the series. The usual ploy with these highly desirable artefacts is to team up musicians (often quite noisy) with an artist / printmaker type, and quite often the results from the visual half of the act are some real eyeball-melters, sizzling combinations of colour and bad-taste imagery to make respectable folk look the other way and throw up over their sneakers. On that account, the Polish visual artist Gosia Bartosik (who designed today’s release) has bucked the trend somewhat with his monochrome drawings, which unfold here into a frieze of modernist doodling…I was going to try and mine these linear scrawls for evidence of fine art history awareness, but the enquiring mind comes up empty.

As to the music, the record is a split – Spettro Family on the A side, Klaus Legal on the underbelly, and both turn in a passably entertaining form of slightly aggressive disco-noise with surly synths and shouty vocals over some wobbly drum machine toys. Spettro Family is a name that may make you wish for a troupe of brothers and sisters who live and reproduce as ghostly circuits in the machine, but it turns out to be one single Italian named Stefano Iannone who has a few albums and singles going back to about 2008 when he commenced work under this moniker, some of them with intriguing titles like The Tenant From Hell, and which may be representatives of the darker side of electronica genres. Here, he demonstrates a nice line in wonky synth playing on pleasing ditties like ‘Moog Patrol’ and ‘Vampire Hoover’ – fun, but kinda forgettable too.

I found more to enjoy in the contributions of Klaus Legal, in actuality Pavel Viry from France, whose ‘PozorPoupPoup’ seems to epitomise everything I think this throwaway EP is reaching for – inane repetition, bored-sounding chants, and monotonous synth settings. Only the perky beat tempo engages the ear and makes you think you’re in for a poppy orange-flavoured treat, until you bite into the sarcastic middle and are left with a punky taste in your mouth. Klaus Legal comes close to recreating the spirit of Alan Vega and Metal Urbain in a non-serious setting with these tracks of his…those intrigued may want to purchase this, or look into his 2014 LP Sarcasmes Et Silences. White vinyl 7-inch pressing, wraparound cover, inserts…presumably limited. From June 2018.