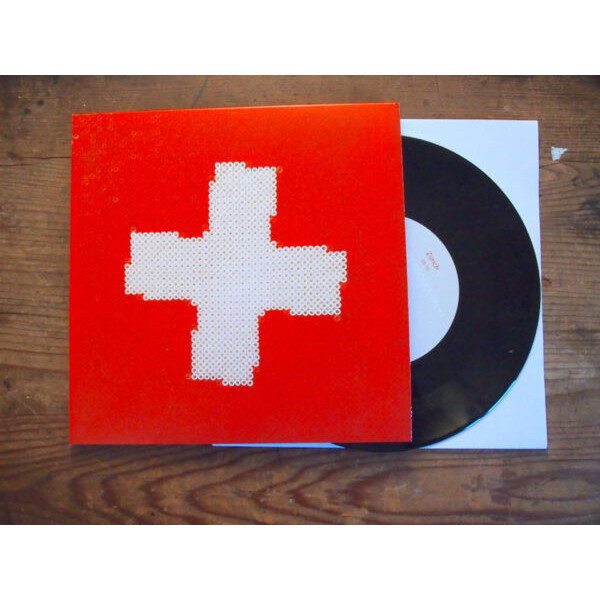 Another record from Tobias Meier, that Swiss saxophonist who we last heard as one half of Cold Voodoo on an intriguing cassette release. Today he’s confining his toots to the extent of a seven-inch single, a miniature format if you will, contrasting strongly with a three-LP set of untamed free-form blowing such as might be favoured by Alan Silva and men of his stripe. On the other hand, this record by Førstepersonental+1 (LYDHOER LYDHOR008) does play at 33 1/3 and offers the happy consumer nearly 15 mins of listening pleasure.

This time, the Swiss saxman is doing it with the Danish drummer Christian Windfeld, and the short-ish minimaloid selections we hear were recorded in two interesting locations. One of these was a “dense industrial zone” somewhere in Zurich, the other was a hayloft. For the latter I suppose this means that free improvisation – not that this record necessarily falls into that category – has now alienated so many listeners that the best a musician can hope for is to play their music to a big pile of straw, and get used to the stony indifference such an audience may offer up. I kid, of course – these locations have been chosen to add “atmosphere” and interesting texture to the recordings, since there’s nothing healthier than playing outside the stuffy old studio or the sweaty club of dinginess. Also many improvvers swear by the adage that the “room” is always to be reckoned as a member of the band, and play accordingly. Well, on one side of this spinner, I think you can make out the gentle murmur of traffic sound (always a winner with phonographers) adding its equally indifferent purrs to the grooves of the jam. As to what they play, this is Tobias in his enigmatic mood, and some of these inconsequential buttoned-up puffers are so cramped and constricted, they’re more like crossword puzzles than free jazz. The short side in particular had me wondering if we can even call it sound, let alone music.

These are good and original characteristics, and I think we need to be set more insoluble riddles in today’s world full of know-it-alls and answer-men. Drummer Windfeld gets into the spirit of the game, and contributes gentle skeletal stickwork rather than crashing thumps. I see he put out a self-released solo LP called Førstepersonental in 2014, which might be worth investigating if you can find one (it was very limited). Two stick insects meet a toad, wonder whether they will appear in a fable of Aesop, and everyone goes home none the wiser. From 25th June 2018.