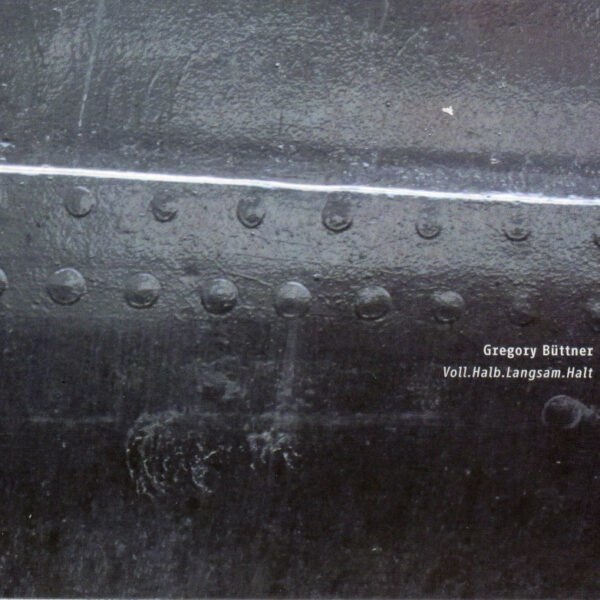 Hamburg sound artist Gregory Büttner often surfaces on his own 1000Fussler label, but here he is on Gruenrekorder, the home of artistic field recording releases. Voll. Halb. Langsam. Halt. (Gruen 181) was recorded on an old steamboat that was built in the 1930s and happens to be made completely of metal. Using his contact mics, Büttner has created a “metal” record putting him directly in line with Test Dept, Neubaten, and other industrial acts who recycled metal to produce a robust clang. The difference is that Gregory Büttner’s odyssey – he did in fact make a trip on this old ice-breaker steamboat, crossing the Baltic Sea on it – is subdued, restrained, and textural in nature. We get a strong taste of the “grain” of the metal, often conveyed through semi-mechanical puttering sounds, and probably what we’re hearing there is a distant echo of the coal fired steam engine of this beast.

Büttner claims he also liked the space of the hull itself as some kind of “resonant room”. Ironically, very little of that comes across on today’s spin, which is cramped and internalised, like being shoved inside the smallest cabin on the vessel, receiving no word from the captain, and being fed a diet of gruel. The title of the record refers to the old-fashioned way of communicating orders from the wheelhouse to the engine room (full, half, slow and stop), by means of the engine order telegraph, which I think used to be called a “Chadburn” back in the days when they were made of brass. Admire Büttner’s selection of this antique ship, but he doesn’t really bring it to life for me, and instead just reduces it to a succession of insert processed noises through his dry electro-acoustic approach. (17/08/2018)