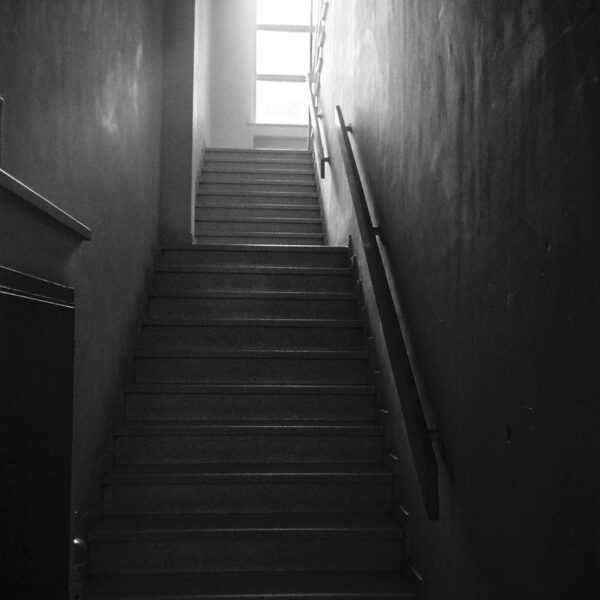 On the cassette Etwas (TANUKI RECORDS #32), we have two sides of live electronics performed by three players, Ilia Belorukov, Miguel A. Garcia and Alfredo Costa Monteiro – all names which are regulars in these pages with their prolific output, yet this is the first time they’ve appeared as a trio. They’re all playing one form or another of electronic music, except our Russian friend also handles the fluteophone – an instrument usually seen in the hands of schoolchildren. The approach here seems to exhibit a concern with small sounds, minimal gestures, low volumes – which gradually grow into noisier scrapes. No quarrel with the “minimalism”, but I am surprised by the general lack of texture to these sounds; all three of them have managed to be much more aggressive and rough on previous outings, resulting in music that is not without a certain menace.

Today’s spin feels cold and cautious, much glacial wind blowing through vacant virtual spaces. Even that shrill piercing tone, when it arrives, hasn’t got the bite of yesteryear when it might have burrowed its way through my jaws like a malevolent dentist drill. Instead it whines like an annoying mosquito. Still, one has to admire the poise and focus of the three players as they balance like tightrope walkers on the edge of a piano wire, knowing that one false move means certain death. Eventually we do experience some drama in the form of slowly-crashing wave forms and crescendoes of abstractedness, which don’t so much promise catastrophic flooding, but do portend puzzling emotions of doubt.

No better way to express this sensation visually than by looking at the cover photo, an ominous staircase worthy of a still from an Alfred Hitchcock movie. We don’t know what awaits us at the top of the stairs, but you can bet it’s not going to turn out well. From 17th September 2018.