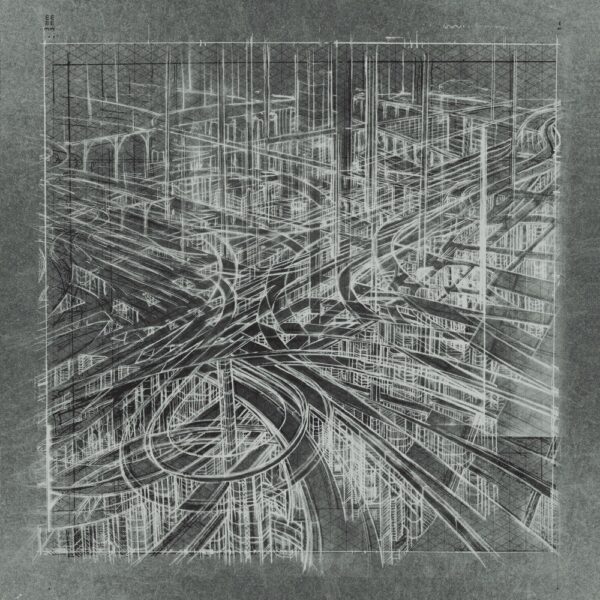 In their respective musical universes Dylan Carlson (Earth) and Kevin Martin aka The Bug have been stretching the limits of what’s possible for nearly 30 years and have found paths to horizons previously unknown. Fate decreed they should meet each other through various wormholes and work together; and so they did, firstly on a short collaboration “Boa / Cold” back in 2014, and then on the album “Concrete Desert” in late 2017. As with “Boa / Cold”, this recording is at once unlike anything either Earth or The Bug have done in the past and yet the music will be very familiar to Earth fans and fans of Kevin Martin’s various projects: it is at once warm, spacious and without limit, roaming over a wide red or brown desert land, noting vast horizons and opportunities; and it can also be cold, remote, forbidding, sinister and redolent of a post-industrial machine world collapsing in on itself. The album title is a reference to the dystopian fantasies of concrete and high technology of 20th-century English writer J G Ballard; the track titles speak of these worlds themselves and the inhabitants that now scurry through them at gutter level.

The album starts from the two polar extremes that Carlson and Martin represent: tracks 1 and 2 show where both artists are coming from in their familiar genres of desert Western doom and isolationist techno dub respectively, though each track also features an underlay of the opposed musical extreme that flavours the primary musical style with atmospheric and tonal contrast. As the album continues with tracks like “Agoraphobia” and beyond, the two styles blend into one music that is truly expansive. Carlson’s starkly minimal and laid-back guitar highlights Martin’s sinister machine beats and rhythms which in turn underline the Earth guitarist’s atmospheric desert drone style. Each track ends up being a descriptive ambient snapshot of a vast alien soundscape, full of vibrant colour, strange textures, weird life-forms and geological formations that defy belief. The music may be highly repetitive but each musical loop adds extra depth to the strange universe that unfolds behind your eyes and between your ears.

From “Broke” and “American Dream” onward, the music becomes darker and grittier, describing a much more desolate and bleak world where shadow freeways criss-cross all over the place but never to any definite destination, and high-rises and skyscrapers in-between stand lonely and empty. This universe is as vast as the previous one we passed through but here life-forms are artificial rather than natural (though they may be cyborgs with just the minimum organic material they need to sustain their silicon structures and blood) and there is a constant feeling of decay, of things gradually running down and falling apart. The music bristles with dark shadow and drone, and while beats are clear, nothing is clean and pure in tone. At this point there is hardly much to distinguish between Carlson’s playing and Martin’s beats and rhythms, save perhaps in “Other Side of the World” where Carlson’s guitar calls listeners’ attention to another, brighter and perhaps better world than the dark post-industrial apocalypse of America after 9/11.

The final track – it’s also the title piece – plays like an elegy to the dreamworld long promised by Hollywood and which drew generations of immigrants to California and the United States generally. It has an eerie sorrowful feel and while it plays like a long farewell, it passes no judgement on the dreams fading away and the nightmares, the exploitation of the poor, the tragedies of those who failed to achieve success, the violence and the waste of human life that supported these dreams and which themselves were the consequences of these dreams.

The LP and digital versions of “Concrete Desert” include three bonus tracks, two of which are middle tracks “Snakes Vs Rats” and “Broke” ripped from the main album and featuring vocals by Martin’s long-time partner-in-crime Justin Broadrick as JK Flesh. The second bonus track is the better of the two in the sheer desperation and hopelessness expressed in Broadrick’s guttural screams. The third bonus track “Another Planet” brings the whole epic work and its concept to a nihilistic close with quiet yet pitiless droning ambience.

While the music tends towards repetition and occasional monotony on the longer tracks, it is highly immersive thanks in part to a strong and unforgettable concept in which we can experience the decline and long, slow fall of Western civilisation, revealing a real world that has always existed and which will continue to exist long after humans have become extinct. For this reason, though individual tracks by themselves can be a bit boring, taken as a whole they conjure up a huge sound universe of strong contrasts in light and dark, colour and monochrome, apparent simplicity in guitar sound and melody, and dark sinister complexity in beats and rhythms.