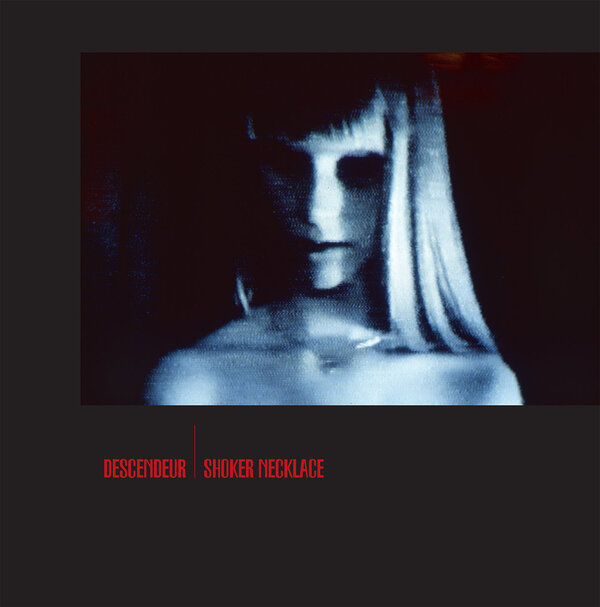 Dark and brutal electronic / voice thing from Descendeur on his Shoker Necklace (WARM #017) ten-incher…this is the French performer Arno Bruil (or Arnaud Bruil), who is also a member of France Sauvage and Femme, here doing it solo with just his vocals and some very primitive synth / sequencer / beats set-up. As I scanned the details of this one, it became clear the subject matter here is not merely dark, it’s just this side of being objectionable, using shocking themes that have been dear to many an “industrial” type since Throbbing Gristle effectively gave permission for every alienated soul to start making records about “taboo” subjects. Sex, crime and death are the taboos in question on Shoker Necklace, with the lyrical content apparently drawn directly from the utterances of infamous serial killers, such as Jeffrey Dahmer and David Berkowitz. Track titles like ‘Body Odour’ and ‘Sex Workers’ reek of nasty misogyny, plus we’ve got the creepy cover photos which do a good job of suggesting even more unpleasant notions.

I’d be perfectly willing to throw this one out into the wilderness, were it not for the powerful single-minded drive of the music. The electronic noise pulsates inexorably in a single groove, never once feeling the need to vary the pitch or tempo, and Bruil growls the lyrics in a low-key, mater-of-fact tone that is even more disturbing given the horrific content. In spite of misgivings, I find it a compelling listen. If it’s any consolation, I might add that you can barely make out a single word of the texts, which are very fragmented in any case, so it might be that the record is largely an exercise in implication and suggestion rather than outright wallowing in unacceptable anti-social subject matter (which is pretty much what I assume Whitehouse are like, but I never heard them). Grim, unsettling noise; thematically, an unwelcome stench in the nostrils. From 15 January 2019.