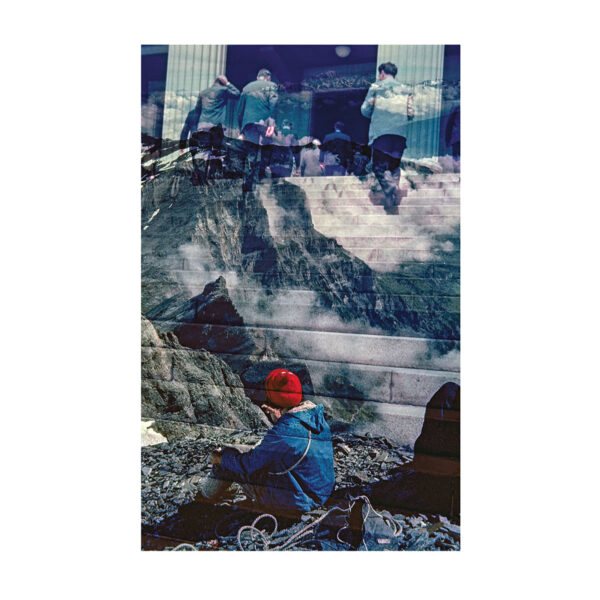 Latest release from TSP fave Mark Vernon is a cassette called Magneto Mori: Kilfinane (CANTI MAGNETICI CANTO 18), and it’s a real gem. Vernon has worked in the past with his own field recordings and his own found tapes to create his compelling audio assemblages; found tapes in particular seem to be one of his specialities, and he accumulates them with a personal fascination bordering on mania.

For this particular work, he created something totally specific to the mountain town Kilfinane in Ireland, for a work which ended up being presented at the convent chapel in that town as part of a Festival in 2017. His press notes reveal an incredibly labour-intensive process involved in creating this work. Collecting sounds from around the town, which he did with his own reel-to-reel tape recorder, seems to have been the easy part of the job. The next step involved collating found tapes which contained the collective “voice” of this community, and these were extracted from a radio archive at Grey Heron Media, put together by Diarmud McIntyre. It so happens that McIntyre’s collection goes back 20 years; I’d like to think that Vernon was in his seventh Heaven at finding this rich trove, this earthy resource of content.

Vernon’s next step was to subject his collected pieces of audio (copies of same, I hope) to a degradation process which sounds positively violent in its disruption; deliberately using magnets to wipe out parts of the tapes; burying the damaged fragments in the earth; then splicing what was left back into a random order. These highly-processed results are what we hear over two sides of the cassette presented today. He has done all of this explicitly as a metaphor for the process of memory itself. If we can accept audio tape as a “container” of memory, Vernon’s work shows us how memory can degrade, fail, put things in the wrong order, scramble the truth, forget some parts and distort others, and so forth. The intervention of the magnets is particularly poignant, somehow; it’s like some brutal uncaring fact of life, causing eradication of our cherished memories and leaving these strange, unexpected gaps.

It takes some considerable imaginative powers and artistic skills to create something like this; given that memory is a fleeting, evanescent thing, something personal to all of us, not well understood as an aspect of the human psyche. But Vernon’s work is a triumph, and expresses precisely what he means to express. I say this as one who cherishes a stock of strange and very personal memories (some of which are completely inexplicable), and this tape resonates very strongly with me.

Reading this back, the listener might be tempted to think that Magneto Mori: Kilfinane is simply the result of a mechanical exercise in tape-degradation and random re-assembly; a cynic might reach for a Burroughs / Gysin reference at some point, and dismiss it as just another post-modern attempt to scramble reality. Or one might suppose that Vernon has no interest at all in people and places, such as this small market town in Limerick, and he’s merely using all of that as a vehicle for his cut-up actions. All of these assumptions would be wholly mistaken; this tape exudes life and passion, the voices of the people and their town still shining forth with a resilience that belies all these attempts to efface them. It’s an impressionistic collage, for sure; you can’t make out the detail a single spoken word; yet the cadences of human speech are ineradicable. I think all of this proves something the sheer endurance of our shared humanity, which survives in spite of its supposed fragility. We need more artistic statements in the world which demonstrate this, and there are precious few that do it with the compassion and subtlety of Mark Vernon. From 26th April 2019.